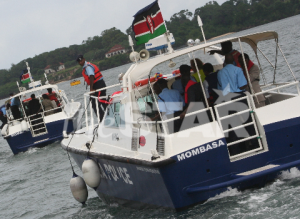 PATROL: Police speedboats patrol the Coastal waters including Vanga at the South and Kiunga


POLICE yesterday arrested a Saudi Arabian national suspected to be involved with al Shabaab. Ahmed Hanas was intercepted near the Kenya-Somalia border in Kiunga, Lamu East district.
According to detectives, the Saudi was detained when he arrived in the coastal town on Wednesday morning. Lamu police boss Samson Obara said they also recovered a speedboat allegedly used to transport al Shabaab fighters between Kenya and Somalia.
Obara told the Star that detectives working on shared intelligence reports raided a hotel where he checked in and arrested Hanas with two Kenyans. The man claimed that he was on a fishing expedition.
“We have handed him over to anti terrorism police officers for further profiling and grilling. His presence in the town remains suspect. The two Kenyans have so far disowned him,” he said.
Obara said the suspect had no travel documents and had difficulty speaking in English or Kiswahili. Police said that he sailed into Lamu from Ngomeni in Malindi.
Obara said Hanas is suspected to be a link man for the regional al Shabaab network and is responsible funding and recruiting local and foreign fighters. “Our intelligence believe that the man is associated with illegal activities including terrorism. He will be arraigned in court once we are done with interrogating him,” said Obara.
Islamic fighters reportedly travel to Lamu town by road and sea where they mix with locals before slipping into Somalia for training. They eventually come back as trained jihadists.
Earlier this year, police arrested six radical Muslim youths attempting to cross into Somalia through Kiunga to join al Shabaab. Anti-terrorism officers working on intelligence reports intercepted a passenger bus to Lamu that they had boarded in Mombasa.
The youths aged between 16 and 18 from Mombasa were later charged in a Lamu court with being members of a terror group. Faraj Fahim Swaleh, Twafiq Swaleh, Nabil Mohammed Lali, Fara Abdi Kassim and Mohammed Abdalla are now serving sentences in Lamu prison.
They were due to be trained by al Shabaab on how to assemble and detonate bombs, use weapons, and to carry out offensives in Somalia and Kenya. Police have warned against the ongoing radicalisation of Kenyan youth.
In a recent video on a Jihadist website, fighters with blurred faces urged Kenyan Muslims to migrate to Somalia to join the jihad. "It is not that Westgate was enough. There are still hundreds of men who are wishing for such an operation, and make Hajrah to Somalia to fight Jihad against Kenya,” said the youths in the video.
The Kiswahili in the video had a clear Kenyan coastal accent. The youths brandished AK47 rifles and a rocket propelled grenade. The National Police Service is yet to issue a statement on the authenticity of the tape.
-
Posted by Siad barre at 4:03 PM