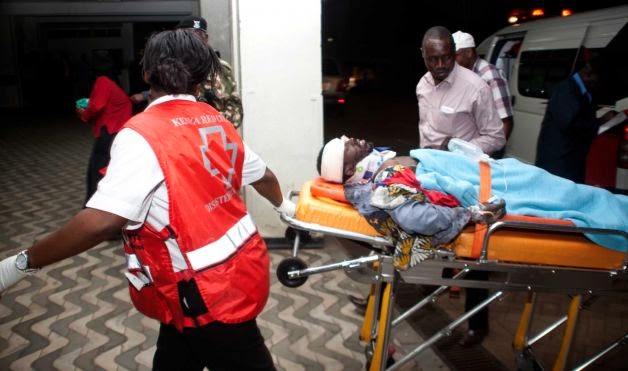 An injured Kenyan is wheeled into Kenyatta National Hospital in Nairobi, Kenya, Monday March 31, 2014, after an explosion in downtown Nairobi killed at least five people. The National Disaster Operation Center said on Twitter that explosions had occurred Monday evening in a neighborhood known for its large Somali population, and the agency said five people were killed and several injured without saying what caused the blasts. Photo: Sayyid Azim, A 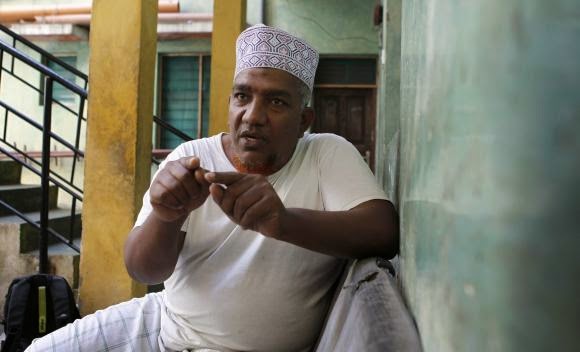 
NAIROBI, Kenya (AP) — A radical Islamic leader who had been sanctioned by the United States and the United Nations for supporting an al-Qaida-linked Somali militant group was assassinated late Tuesday, his lawyer and officials said.
The killing by unknown gunmen came as the Kenyan government announced it had begun an operation to stop a wave of attacks in the country as authorities arrested more than 650 people in Nairobi following a bomb attack Monday.
Attorney Mbugua Mureithi said Abubakar Shariff Ahmed was shot dead along with another unidentified man near the Shimo la Tewa prison in the coastal town of Mombasa. The killings threaten to spark retaliatory violence.
Ahmed's death is the latest to hit the Masjid Shuhadaa Mosque, which officials call an incubator of terrorism. Sheik Aboud Rogo Mohammed — a friend of Ahmed's — was assassinated in August 2012. A year later another mosque leader was killed. There have been no arrests in either case.
Mohammed had been sanctioned by the U.S. and U.N. for allegedly supporting al-Shabab, which has vowed to carry out terrorist attacks on Kenyan soil to avenge Kenya's sending of troops to Somalia.
Following the first two killings, Ahmed, also known as Makaburi, told The Associated Press in October that he believed he was marked for death.
"I'm living on borrowed time. The same guy who ordered Aboud Rogo's death is going to order mine," Ahmed said.
Ahmed had clear links with al-Shabab, said Matt Bryden, the former head of the United Nations Monitoring Group on Somalia and Eritrea and a top expert on al-Shabab. Bryden said Ahmed's death may cause the militant group to plan retaliatory attacks against Kenya.
Ahmed had often said he was in danger of being killed by security agents, Mureithi said. He said Ahmed started making those claims soon after he and Mohammed were nearly abducted outside a court building in Nairobi in July 2012.
Mureithi said Ahmed's last interview with a local TV station in which he appeared to justify the killings of civilians during the September terrorist attack on an upscale mall in Nairobi may have contributed to his death.
Riots broke out in Mombasa after Mohammed was killed in August 2012 and after Sheik Ibrahim Ismael was killed in October. Ahmed was charged with inciting violence.
Kenya is still on edge following the September attack on Nairobi's Westgate Mall that killed at least 67 people. Since then al-Shabab sympathizers have been blamed for an explosion at Nairobi's main airport, a grenade attack on tourists on Kenya's coast, a blast on a bus in Nairobi, and three blasts Monday night in the capital that killed six people.
Authorities said Tuesday they had arrested 657 people following the latest attack. Kenya frequently makes mass arrests after attacks only to release nearly all of those arrested.
Last month, police on the coast discovered a car bomb packed with explosives that a police official has said was meant to target a shopping mall. Later in the month gunmen killed six people in a church outside Mombasa.
A senior Kenyan security official said that security agencies believe a large scale attack is imminent. He said because police foiled the planned car bomb in Mombasa, terrorists are more determined to carry out another.
Bryan N. Kahumbura, a Horn of Africa analyst with the International Crisis group, said a mix of issues is fueling the escalation of attacks.
The disappearances and executions of Muslim youth suspected of having links to terror are angering the Kenyan Muslim community, Kahumbura said. Many Muslims feel they are being profiled by police, he said.
Posted by Unknown at 5:12 PM