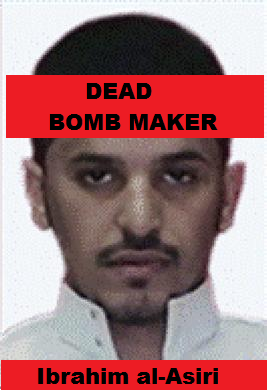 Al Qaeda's chief bombmaker, Ibrahim al-Asiri, is thought to be behind the design that went into the underwear bomber, Umar Farouk "Crispy Crotch" Abdulmutallab's, undetectable explosives. And we know how that "ingenious design" turned out? Sure, it had no metal parts and therefore could be easily passed through airline security but we're not half glass empty around here. Half glass full: the wearer now sings soprano and no one else was hurt.
I know, it's easy to laugh at al-Asiri and part of me says "hey, we should have let this guy live and keep blowing up more jihadis" if not for the likelihood that he would probably have kept improving the design of this and other devices over time. When the other side has no regard for human life, including the lives of their own foot soldiers, then failures like Abdulmutallab are viewed as human experiments in the furtherance of jihadi science. It's all fun and games as they prematurely detonate themselves all the way up until the point that they don't.
In any event, the other notable thing here is that al-Asiri and the 54 other jihadis killed in Yemen weren't droned -- a US special forces team took them out the old fashioned way. It's an interesting development. Since bin Laden was killed by SEALs a few years ago I can only think of one other time (offhand) that we've gone with boots on the ground rather than drones in the sky. That would be the SEAL raid last year into a Somali villagewhich was nixed before the target was achieved. Am I missing any others?
Al-Asiri has been reported as killed before -- the last time in a drone strike -- but it turned out to be a false alarm. This time, at least if MSM reports are to believed, the remains were identified. The operators behind the hit are reported to have brought dogs with them to help them search through the hit zone and find remains, apparently to aid in identifying the targets. But maybe we got lucky and the dogs found survivors? Too bad Obama shut down our Black Sites and got rid of anything approaching harsh interrogation.
It's not clear that al-Asiri was even the primary target, for included among the dearly departed was also Al Qaeda in the Arabian Peninsula (AQAP) leader Nasir al-Wuhayshi, who just last week showed up in a propaganda video talking to close to one hundred jihadis in Yemen. And if we just killed 55 bad guys ... Let's see here, 100 - 55 = time to dig deep into the bench and go to al Qaeda's third stringers.
INN:

Reports indicate that a massive US military operation in Yemen on Saturday and Sunday killed well over 55 Al Qaeda terrorists. Among the dead reportedly is Ibrahim al-Asiri, the chief bombmaker of the terrorist organization.

A 4x4 truck which the 32-year-old al-Asiri was thought to be in was ambushed by US special forces over the weekend, according to the Daily Mail.

The US special forces, who were dropped in by helicopter, reportedly took position by the road and waited for the truck to arrive before showering it with a hail of bullets. While the occupants managed to fire back, all were killed in the barrage.

Now is the time at the Jawa that we dance!..more Hammer Time: AQ Chief Bombmaker Killed
Posted by Siad barre at 3:23 PM