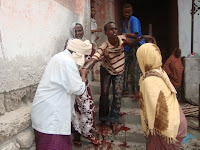 MOGADISHU, Somalia - Somali insurgents fired mortars at the presidential palace in the capital, killing seven civilians and two government soldiers, witnesses and officials said Wednesday.Military spokesman Farhan Casoye said the insurgents were aiming for the palace but hit a residential area Tuesday night — the latest bloodshed in a surge of violence this month that has killed nearly 200 people. Insurgents are trying to topple the country's Western-backed government and install a strict Islamic state.The mortars rained down on our home, I ran with my children for cover and on my way I saw the dead bodies of two government soldiers in uniform, they were hit by a mortar, Sahra Abdullahi Gedi, a mother of six.The military spokesman said seven civilians were killed.Somalia is riven by fighting among clan warlords and an Islamist insurgency that has killed thousands of civilians and sent hundreds of thousands fleeing for their lives in recent years. The country has not had a functioning government since 1991, and the United States worries that Somalia could be a terrorist breeding ground.On Tuesday, the U.N. Security Council voted unanimously to condemn the recent surge in fighting in Somalia and called for an end to actions that undermine the country's Western-backed government.
Somalia Presidential palace under attack
Seven people are reported to have died when rebel mortar shells aimed at the presidential palace in Somalia's capital Mogadishu landed on homes. Islamist insurgent groups are trying to topple Somalia's government .
http://www.voxafrica.com/modx/en/news-en/headlines/somalia-presidential-palace-under-attack
Posted by Siad barre at 11:27 AM