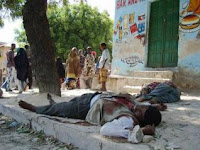 nesses said the government soldiers in the checkpoint captured the commander in a mini bus that he was traveling in and they captured him with a pistol and a bomb and killed him instantly on the scene. Al Shabaab is fighting against the Somali government and the African Union troops in the country.on Insurgent commander who was killed in Mogadishu on Friday evening. Terrorist Abdulkadir Hamsa better known as Qatatow, was killed in Bakaro market in Mogadishu on Friday evening. He defected from the government recently and joined Hizbul Islam Insurgent group. Speaking with Mogadishu FM radios, a spokesman for the Islamic Courts Union Abdirisak Ahmed Qeylow condemned the killing of the commander. Qatatow, was famous for the fighting against the Ethiopian troops and the former transitional government led by president Abdulahi Yusuf Ahmed.Last week newly appointed top somalia military commander General Yusuf Hussein (Dhumal Announces Plan to Defeat Insurgents in Mogadishu announced major combat offensives , on his First Statement he said ,We are fighting a Global Unconventional War. Clearly, our way of life is at stake. Victory is defined when others are capable and motivated ,Because it is an unconventional war, we absolutely must transform the way ... "To defeat terror, you must go on the offensive and take the fight to the them. an unconventional war against it by unconventional means is ... We are in a big war, and we cannot fight it by playing defense, . It is now time to take an unconventional approach . Somalia government sacks top military commander General Said Dere,
Posted by Siad barre at 8:13 AM