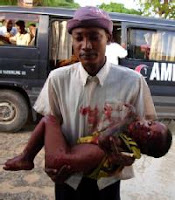 THE battle for the Somali capital of Mogadishu has entered its second day.
Witnesses say three were killed and 30 wounded in clashes between government forces and Muslim insurgents who have taken control of key neighbourhoods in recent weeks.
A human rights group says more than 50 have been killed and more than 180 wounded.
In the battered central Somalia town of Dusa Marreb Sufi clerics, with their imams being murdered, are now doing what many other men have chosen to do in anarchic Somalia: they have picked up guns to fight back against the Shabab, one of the most fearsome extremist Muslim groups in Africa.
"Clan wars, political wars; we were always careful to stay out of those," said Sheik Omar Mohamed Farah, a Sufi leader. "But this time, it was religious."..more..http://www.theage.com.au/world/somali-clerics-take-up-arms-against-extremists-20090524-bjfs.html
Posted by Unknown at 9:25 AM