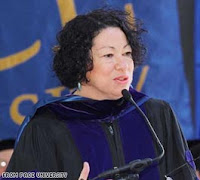 WASHINGTON (CNN) -- President Obama has chosen federal Judge Sonia Sotomayor as his nominee for the U.S. Supreme Court, two sources told CNN on Tuesday. Sotomayor would be the first Hispanic U.S. Supreme Court justice if confirmed.
Obama plans to announce his nominee at 10:15 a.m. ET Tuesday, sources told CNN. Sotomayor, a 54-year-old judge on the 2nd U.S. Circuit Court of Appeals, was named a U.S. District Court judge by President George H.W. Bush in 1992, and was elevated to her current seat by President Clinton. Supporters say that appointment history, along with what they call her moderate-liberal views, would give her some bipartisan backing in the Senate. A senior White House official said that Sotomayor was "nominated by George Bush -- then Bill Clinton -- [and has] more judicial experience than anyone sitting on the court had at the time they were nominated." But she has suffered through recent stinging criticism in the media and blogs from both the left and right over perceived -- some defenders say invented -- concerns about her temperament and intellect...more..http://www.cnn.com/2009/POLITICS/05/26/supreme.court/index.html
Sotomayor biography in brief
Posted by Unknown at 6:21 AM