The United Nations Special Representative to Somalia, Terrorist Apologist Ahmedou Ould-Abdallah . , visited the Somali capital Mogadishu for the first time Monday, as Al Shabaab militants claimed responsibility for yesterday's deadly suicide bombing, Radio mogadishu reports,Mr. Ould-Abdallah held private discussions with Somali President Sheikh Sharif Ahmed at the Villa Somalia presidential compound in Mogadishu, Information Minister Farhan Ali Mohamud told reporters afterwards.""He [Ould-Abdallah] attended the Council of Ministers meeting, where it was decided that airplanes cannot land at airports the government does not control," the Information Minister said without elaborating.He urged international agencies delivering humanitarian aid by port and airport to contact the Somali government before using airports and port facilities outside the government's control.President Sheikh Sharif's interim government controls very little territory in Somalia and most port and airport facilities in the country are outside the government's control, with Islamist rebels controlling airports and ports in Kismayo and Marka, and an airport in Baidoa.Information Minister Farhan did not elaborate whether or not the ban includes the self-governing regions of Somaliland and Puntland.
The U.N. Special Envoy flew out of Mogadishu's Aden Adde International Airprot later today without addressing local media.'More suicide bombings'A fighter who spoke for Al Shabaab guerrillas told reporters that yesterday's deadly suicide bomb, that killed 10 people was organized by Al Shabaab and intended to inflict "maximum damage" on a government target. READ: Suicide bomber kills 10 in Mogadishu, incl. six soldiers,Sheikh Hussein Ali Fidow Al-Shabaab political chief, told a press conference in Mogadishu that the suicide bombing was carried out by Abdulkadir Hassan Mohamed 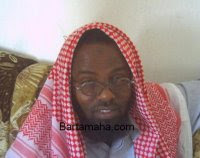 "Atir.""Atir was born in Medina district of Mogadishu,hawiye ." Sheikh Fidow said, while aiming to dismiss Somali government charges that the suicide bomber was a foreigner.He indicated that Al Shabaab is "organizing more suicide bombings" to target government officials and buildings. Yesterday's deadly attack targeted a military facility where hundreds of government soldiers were reportedly receiving training.
But Information Minister Farhan rejected Fidow's claims, saying that the suicide bomber was shot before his vehicle exploded and therefore "damage was minimized."The U.S. government considers Al Shabaab to be a terrorist organization and accuses its leaders of having ties to Al Qaeda.
The Terrorists Living Among Us: University of Minnesota, Abdi Samatar.Defining Terrorism
In Somalia the President, Sheikh Sharif Sheikh Ahmed in a rare press confrence, has been calling on the international community to help government forces drive out foreigners who are helping Islamic militants in their offensive against his government. Well the rebel push against the government is being spear headed by Al Shabaab with suspected links to al Qaeda and Hezb al-Islam(iya), a political group loyal to the influential cleric Sheikh Hassan Dahir Aweys. On Monday Al S

habaab claimed responsibility for a suicide attack that claimed 7 lives. So who exactly is Al Shabaab? Paul Bakibinga spoke to Professor of Global Studies at the University of Minnesota, Abdi Samatar. made a controversial statement in an interview with bbc Paul Bakibinga ,In Somalia, Al Shabaab claim responsibiltiy for attack, but who exactly are they?
most dangerous professors Series .
The University of Minnesota apologists Abdi Samatar
"Blame America First" mentality
plunder. ...of The United States ??? Your Tax Dollars At Work
Listen
Related Stores
The Terrorists apologists Living Among Us,
William Mitchell College of Law.
Minneapolis Imam Decries ‘the Hell of Living in America’
Posted by Unknown at 12:58 AM