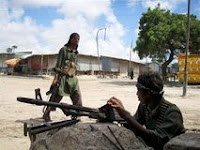 MOGADISHU (AFP) – Fierce clashes on Friday left at least 14 people dead as Somali government forces attempted to drive Islamist rebels out of the capital Mogadishu, officials and witnesses said.Troops attacked the rebels in three positions in southern Mogadishu which they wrested from the government in recent heavy clashes that have killed more than 100 people.Military spokesman Farhan Mahdi Mohamed vowed they would fight until the insurgents are dislodged from the capital, but witnesses said they saw the troops beating a retreat as their rivals advanced.Eight passengers were killed when a mortar shell struck a bus in southern Mogadishu."The bus was passing in front of my gate when the disaster occurred. There was blood and human body parts all around. It was a horrible scene," said Bashir Abdurahman.Another six people, among them a local journalist and three government troops, were killed in the renewed battles, witnesses and officials said.Officials at Mogadishu's Medina hospital said 53 people had been taken for treatment.The fighting had fizzled out into sporadic gunfire by Friday afternoon, an AFP correspondent reported...more..http://news.yahoo.com/s/afp/20090522/wl_africa_afp/somaliaunrest2ndlead_20090522150656
Heavy fighting explodes in capital of Somalia
http://news.yahoo.com/s/ap/20090522/ap_on_re_af/af_somalia
Posted by Unknown at 10:25 AM