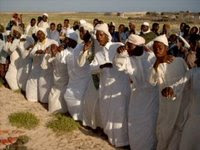 A Somali armed group has vowed to defeat hard-line insurgent groups, including

al-Shabab, which aim to topple the new government. The Alhu Sunna Waljamaca armed group claims it would have destroyed al-Shabab a long time ago if President Sheikh Sharif Sheikh Ahmed had taken its advice soon after he was elected leader of the government.
On Monday, President Sheikh Sharif pleaded with the international community to help his administration ward off Islamist rebels who have reportedly drawn in hundreds of foreign fighters to their ranks...more..http://www.voanews.com/english/africa/2009-05-26-voa2.cfm?rss=africa
Posted by Unknown at 9:30 PM