In Somalia, African Union takes the offensive in information war 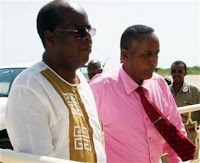 AMISOM is rehabilitating Radio Mogadishu and publishing articles to 'empower' Somalis and push back against Islamist insurgent
Nairobi, Kenya -
No sooner do officials from the African Union stabilization force arrive in Somalia's battlefield of a capital, Mogadishu, than Islamist insurgents send them a warning."AMISOM," reads the text message on their phones, "we're going to kill you."Fighting in Mogadishu has escalated in the past month, and the undermanned and underfunded African peacekeeping force known as AMISOM is increasingly bearing the brunt of the ugly conflict, which pits extremist Islamist insurgents against a new, more moderate, transitional government.Analysts say the mission has held up well, given the circumstances. But AMISOM officials say they – and the fragile government they aim to protect – are losing on one important front: the information war.Insurgents loyal to militias known as Al Shabab, or "The Youth," and Hizb al-Islam, the party of Islam, began this latest round of attacks on May 8. And they have "misled" the international community as to their strength, according to Nicolas Bwakira, the African Union Commission's special representative for Somalia, and head of the peacekeeping mission.But AMISOM is now fighting back – with words.Sitting in his Nairobi office – due to the lack of security in Mogadishu, AMISOM's headquarters is in Kenya – Mr. Bwakira is on a mission to set the record straight, as he puts it."The image is that the government has no control whatsoever. That's not true," he says.AMISOM is planning a public awareness campaign – hiring journalists to craft both the mission and the government's message, rehabilitating the defunct state-run Radio Mogadishu, buying air time, and publishing articles in the local press. ..more..http://www.csmonitor.com/2009/0527/p06s17-wogn.html