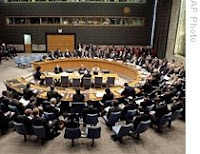 The United Nations Security Council has extended the mandate of African Union peacekeepers helping the Somali government.In a resolution adopted unanimously on Tuesday, the Security Council agreed to extend the mandate by eight months, to December 31 of this year.Britain's ambassador to the Council, John Sawers, said the measure endorses what he called a far-reaching support package for the AU force, amounting to several hundred million dollars over the coming year.The AU mission consists of about 4,000 soldiers from Uganda and Burundi, who are helping the Somali government in its fight against militant Islamist insurgents.African Union leaders have urged the U.N. to assume control of the force. But Sawers said Tuesday there has been no movement on that issue. He said Security Council members believe the current AU force is the "right arrangement."more..
http://www.voanews.com/english/2009-05-26-voa36.cfm
UN extends African Union peacekeeping mandate
http://www.france24.com/en/20090527-embedded-with-african-union-soldiers-somalia-franck-berruyer
The Somali Conflict Root causes , peace-building strategies
Posted by Siad barre at 4:11 PM