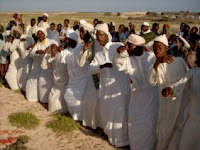 sufi
MOGADISHU—Al Shabaab militant group has desecrated four well-known graves in towns near Afgoye, 30 km south of Mogadishu, officials said on Wednesday. Forces from the group have demolished four graves buried in famous Sheiks in Lungare Village which thousands of people pay homage to them every year. One of the graves was buried in Sheik Osman Sheik Abdirahman, a well respected shrine in the area by Sufi adherents. Al Shabaab and their ally Hizbul Islam destroyed hundreds of graves in southern towns since the beginning of this year 2009. Al Shabaab has recently been looking for graves in the area. They described the graves as Un-Islamic. The Sufi Islam adherents angered by the desecration of the graves took up arms to fight against al Shabaab in central Somalia.
An Islamic Dark Age Looms in Somalia
Posted by Unknown at 9:21 AM