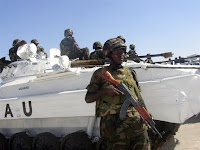 Eight Ugandan soldiers on the Somali peace-keeping mission were by press time still in intensive care at a Nairobi hospital battling a strange ailment suspected to be a result of poisoning.
The soldiers are feared to have been poisoned through water sources by the Islamist fundamentalists, Al Shabaab, who are opposed to the interim government in Somalia and the peace-keeping mission, sources told Daily Monitor. But Maj. Barigye Ba-Hoku, the African Union Peace Keeping Mission spokesman, yesterday dismissed the poisoning claims. “It’s not true because this ailment is general and it has affected the Somalis outside the camps. It’s not only the peacekeepers,” he said.“[Kenyan and Amisom] doctors are studying the cause of the illness and they will soon come up with the report,” Maj. Ba-Hoku told Daily Monitor by telephone from Mogadishu.The infected Ugandan peacekeepers are part of the over 50 who have contracted the ailment that has in the last three weeks hit the Burundian and Ugandan camps in Mogadishu. Al Shabaab early this month claimed they had poisoned Burundian peacekeepers.Four of the Ugandan soldiers were evacuated from the Somali capital, Mogadishu, and flown to Nairobi on Tuesday for treatment at Nairobi International Hospital, sources who did not want to be named because of the sensitivity of the subject said.The Ugandan and Burundian camps are about two kilometres apart, each with its water tanks. Last week, the Deputy Amisom Commander, Gen. Juvinele Niyoyunguriza, told a group of Ugandan journalists in Mogadishu that Burundian forces had been infected with a strange disease.Gen. Niyonyunguriza said 50 soldiers had been admitted and four died at Nairobi International hospital.Mr Gaffel Nkolokosa of African Union Mission for Somalia in Nairobi yesterday said 12 of the 50 were evacuated from Mogadishu three weeks ago and brought to Kenya for treatment after exhibiting symptoms similar to those of their colleagues who had been admitted. He, however, said they had recovered and returned to Burundi.According to sources, the Ugandan soldiers had developed fever and skin rash, before developing body organs’ failure.Amisom Medical Officer James Kiyengo said on Friday that the strange ailment is a bacterial infection caused by rat’s urine. He identified the infection as leptospirosis..more..http://www.monitor.co.ug/artman/publish/news/UPDF_soldiers_poisoned_in_Somalia_88893.shtml
Some ... background information. Related Articles ...
UPDF faces al Qaeda threat in Somalia
Mystery illness hits peace force
Posted by Siad barre at 7:59 PM