Here is a full transcript of the interview: 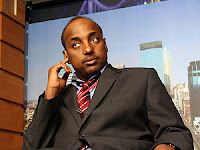 DAVID MCKENZIE, CNN CORRESPONDENT (voice-over): Far from the streets of Somalia, a Somali-American family gathers in front of their home in Minneapolis, caught up in this bloody conflict. A mother mourns her beloved son. Jamal Bana described as a smart and hardworking student killed a world away in the chaos of Somalia.
OMAR JAMAL, SOMALI JUSTICE ADVOCACY CENTER: Jamal was excellent and went to Washburn High School and after that he went to a college, very smart young kid.
MCKENZIE: Jamal was only 1 when his family fled the country torn by civil war. He was studying engineering at two colleges. But in November last year, he simply vanished.
JAMAL: The family don't know what took him. OK. We don't know how he left, the family have no. He left without parental consent. They didn't know. By the time they found out, there's nothing they could do about it. So, the family wants to know what happened to him.
MCKENZIE: Then his fathers found photos of his dead son on a Somali news Web site, seen here in footage taken by a Somali journalist. The family fears that he was recruited to fight with Al-Shabaab, an al Qaeda link Islamic militant group that is on the U.S. terror list and is fighting a brutal war against country's weak transitional government.
Three Somali-Americans from Minnesota have died in Somalia, including Shirwa Ahmed, who blew himself and 29 others up in October, the first American citizen suicide bomber. There are more than a dozen Somali- Americans missing there, say their families. Those missing could have entered the fighting, but their families say they have no idea what they're getting involved with.
OMAR: Somebody must have put something in his mind. They must be somewhat disillusioned and indoctrinated because he didn't have any clue about Somalia at all.
MCKENZIE: And as Somalia descends further into chaos, it's becoming clear that Al-Shabaab has recruited far and wide in its campaign to bring a Taliban-style government to Somalia and that even the sons of the families that have fled this chaos to America have felt compelled to return to a fight that has already raged for decades.
Dave McKenzie, CNN, Nairobi.
(END VIDEOTAPE) SANCHEZ: You know, it's frightening to think that somebody can actually convince kids living in the United States that they should leave the United States and go fight in another country. Omar Jamal is good enough to talk to us about this again.
Omar, always good to see you.
JAMAL: Good to see you, Rick.
Posted by Unknown at 11:46 AM