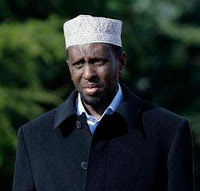 WASHINGTON (Reuters) - U.S. Secretary of State Hillary Clinton plans to meet the president of Somalia's transitional government during a seven-nation trip to Africa next week, the State Department said on Monday.
Clinton will become the highest-ranking U.S. official to meet Somali President Sheikh Sharif Ahmed, signaling the Obama administration's strong wish to bolster the fragile government in the lawless Horn of Africa country.
The meeting will take place on the sidelines of an annual trade forum with sub-Saharan countries being held in Kenya's capital, Nairobi, on August 5, said State Department spokesman Ian Kelly in a statement announcing the trip to Africa.
Kelly gave no other details of the meeting with Ahmed, who is struggling to take control from hard-line opposition fighters bent on overthrowing his western-backed government.
Western security agencies have long feared that Somalia, with its large coastline and porous borders, could become a haven for foreign militants looking to attack the region and beyond.
Somalia's coastal waters -- strategic shipping lanes linking Asia and Europe -- have also become a focus of pirates who have made off with millions of dollars in ransom from hijacking vessels, including U.S.-flagged ships...more..http://www.reuters.com/article/politicsNews/idUSTRE56R01520090728
Posted by Siad barre at 12:51 AM