'Ruthless' police killer faces 35-year minimum,Revealed: How policewoman's killer was snatched from a country 'too dangerous' to deport him to 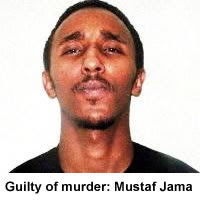 Mustaf Jama, 29, was told he would serve at least 35 years for the murder of the mother-of-three. Jama was part of a gang that gunned down the popular officer and wounded her colleague, Pc Teresa Milburn, during the raid in Bradford in November 2005. Sentencing him, judge Mr Justice Openshaw said he was one of a "team of ruthless and dangerous men". Jama was convicted at Newcastle Crown Court following a re-trial after a jury failed to reach a verdict at a hearing in January. He fled to his native Somalia despite being Britain's most wanted man at the time using a friend's passport. He was finally brought back to the UK to face justice in 2007 after an undercover operation to smuggle him out of Africa. Pc Beshenivsky, 38, who also had two stepchildren, was shot and killed on her youngest daughter's fourth birthday as she responded to an alarm call.
Her colleague Pc Milburn was also gunned down in the street as the robbers escaped with little more than £5,000. ..more..http://www.independent.co.uk/news/uk/crime/ruthless-police-killer-faces-35year-minimum-1756988.html
Revealed: How policewoman's killer was snatched from a country 'too dangerous' to deport him to
http://www.yorkshirepost.co.uk/news/Revealed-How-policewoman39s-killer-was.5484594.jp
Posted by Siad barre at 9:08 AM