Opposition’s efforts to topple Somali Government must not succeed – Ban 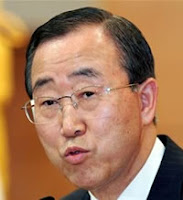 23 July 2009 – Repeated attempts to overthrow Somalia’s Transitional Federal Government (TFG) are a source of deep concern, Secretary-General Ban Ki-moon said in a new report, calling on the international community to continue its support for the struggling Horn of Africa nation.
The spike in attacks by insurgents comes “at a time when the Government is making concrete progress towards fulfilling its transitional agenda, which the population has increasingly welcomed,” Mr. Ban wrote in his latest report on the situation in Somalia.
“The attempts by elements opposed to peace and stability to seize power by force from the legally constituted and internationally recognized Government must not be allowed to succeed,” he said, adding that the authorities must be enabled to “exercise its authority countrywide for the sake of the Somali people.”
Insurgent groups, such as Al-Shabaab, have stepped up their strategy to intimidate the Somali people, including through methods such as “high gain” assassinations and arrests of clan elders, some of whom have been murdered.,,more..http://www.un.org/apps/news/story.asp?NewsID=31559&Cr=somali&Cr1=
Posted by Unknown at 11:57 PM