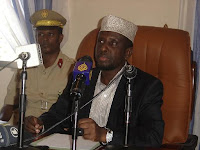 PRESIDENT Sharif Ahmed, a former geography teacher, does not seem overwhelmed by the almost insurmountable task of pacifying Somalia. The soft-spoken moderate leader of the Islamic Courts, who was elected by an enlarged parliament in January, speaks in clear and decisive terms about the Islamist insurgents whom he says have been brainwashed by global jihadists, and his dream of restoring law and order in a country that has been without a functional government for almost two decades.

How would you analyse the current situation?
There has been war in Somalia for a long time. The peace talks in Djibouti led to this progress (an all-inclusive government) and gave Somalia an opportunity to recover. Unfortunately, the opposition to the peace process does not have a political agenda. They just want to control Somalia and hand it over to global terrorists. Whenever we call them for peace talks, they don’t want to listen.

Are you trying to engage the opposition?
There are some members of the opposition whom we managed to get on board. They are now part of the government. They were calling for the introduction of Sharia and the government has accepted to implement Sharia law.

They claim they are fighting for Islam. But they are wrong. Islam does not allow the things they are doing; the killings, the chaos. In the history of Islam, when the Prophet Mohamed formed the first government, it was inclusive. Today, they say they are the only Muslims. The others are not Muslims. They infiltrated the Union of Islamic Courts, which I led. Now people think they are members of the Islamic Courts. They are using our name and the goodwill towards the Islamic Courts.

When the Islamic Courts were in power in 2006, Somalia was peaceful. One could travel around the country undisturbed. You are back in power now but the security seems worse than ever. What happened between then and now?
The difference is that while we were out, elements and top leaders of al-Qaeda came here. Previously, we had some elements of al-Qaeda but they were not active. While we were away, they took advantage of the situation and brainwashed a lot of young people. Al-Qaeda brought in its own people (foreign fighters). Their only agenda is to kill. Now they pose a threat not only to Somalia but to the region as a whole and the neighbouring countries.

When you are a member of al Shabaab, it is difficult to get out; they kill you. You need to look for an opportunity to get out of their ranks. Back in 2006, our goal was to stabilise the country, not to hurt or kill anyone. That is still our position. ..more.http://www.newvision.co.ug/D/8/459/689359
Posted by Unknown at 4:54 PM