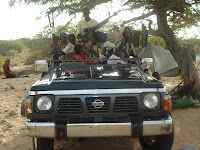 MOGADISHU – the Islamic organization of Ahlu Waljma’a has Wednesday held a press conference in Mogadishu and said for the first time that they are organizing forces from the whole the 18 regions in the Somali country. Sheik Abu Bakar Ahmed Ali, one of the officials of Ahlu Sunna Waljama’a organization told the reporters that there are no differences between the clerics and the transitional government. heik Abu Bakar said that both sides reached an agreement in the Kenyan capital Nairobi pointing out that the TFG did not consider the agreement.The statement of the Islamic organization of Ahlu Sunna Waljam’a comes as the TFG president Sharif Sheik Ahmed suggested a long address before parliamentarians in Mogadishu recently which he praised more on the fighting that Ahlu Sunna Waljama’a forces involved in central Somalia.

related Stores published in the past