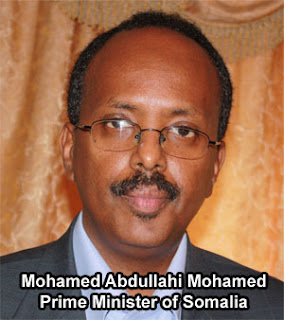 i hope there are no strings attached.

A press statement from the PM  Office on Saturday read: We appreciate and grateful for the goodwill  of the People's Republic of China. I  hope there is no  stings attached. Somali  PM made it very clear  .. "Motivation behind the financial aid". according to Short's statement, he said We ask  Ethiopian government respect the territorial integrity of Somalia including  North West Somalia  or tribal entity separatist - AKA Somaliland.. we want everyone to know "U.S. oil companies already have exclusive right. Business contracts  has been negotiated and signed by Honorable Somali President Mohamed Siad Barre with American oil companies  .they Exclusive Have the Right for exploration and production.We have written contract. We ought to abide by it.
ADDIS ABABA, Dec. 24  The Commissioner for Peace and Security of the African Union (AU) Ramtane Lamamra, and the Ambassador of the People's Republic of China in Ethiopia Gu Xiaojie on Friday signed an agreement on the provision of aid to the AU Mission in Somalia (AMISOM).

The grant amounting to 30 million RMB, (over 4 million U.S. dollars), will be used to supply equipment and materials for AMISOM. The signing of this agreement comes in the wake of the adoption by the United Nations Security Council, on Dec. 22, of resolution 1964(2010), in which it, inter alia, requested the Secretary- General to continue to provide a logistical support package for AMISOM, for a maximum troop strength of 12,000, as called for by resolution 1863 (2009).

In resolution 1964(2010), the Security Council also called on UN Member States and regional and international organizations to make direct bilateral donations in support of AMISOM.

By generously providing aid to AMISOM, the People's Republic of China is responding to the call made by the United Nations Security Council and the earlier appeal by the AU Peace and Security Council (PSC) for AU partners to support the ongoing efforts in Somalia, AU said in a statement. Gu Xiaojie reiterated China's continued commitment to strengthen its cooperation with the AU in the area of peace and security and to support all endeavors in this regard. He lauded AU's efforts and resolve towards the promotion of peace, security and reconciliation in Somalia.

Speaking on the occasion, Commissioner Lamamra stated said that "China has, over the years, been providing multifaceted assistance to the AU and African countries as they strive to address the many challenges facing the continent. Today's donation is a further testimony of China's commitment and its determination to contribute to the furtherance of peace and security in the continent".

Furthermore, Commissioner Lamamra avails himself of this opportunity to renew the appeal to all AU partners to provide the requisite support to AMISOM as it enters a new phase of its deployment.

It is also important to know that this week China´s national oil exploration company has been talking to tribal entity separatist aka Somaliland and discussing about Oil Exploration. However american oil companies are now saying that china cant drill anything in Somalia, since they have all the exploraton rights signed by Siad barre i the 80´s.