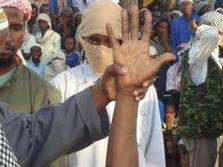 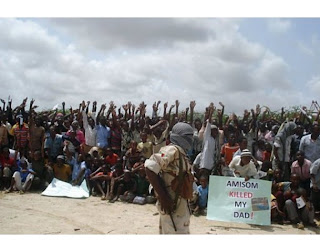 Diinsoor — Al shabaab militants amputated the hand of a young Somali boy on Tuesday after charging him with theft, local sites have reported The act took place in Diinsoor district in Bay region of southern Somalia and was attended by hundreds of people who were forced to watch the amputation of the teenager’s hand.
The district judge presiding over the hearing said that the man was found guilty after confessing to stealing money and other materials.It is contrary to Islamic teachings to cut the arms of a thief for the first act of theft. The culprit is supposed to be given two warnings before the Sharai Law of amputation is applied. It also depends on the amount of money stolen. The judge should assess if the theft has been caused by hunger .This young man is now left disabled and unable to earn a proper living in future and the punishment is disproportional to the crime committed.

Al Shabaab are often lead by poorly educated young men who have been brainwashed through ad-hoc education at Madrasas or Quranic schools and belief that punishment and fear is the key to law and order.