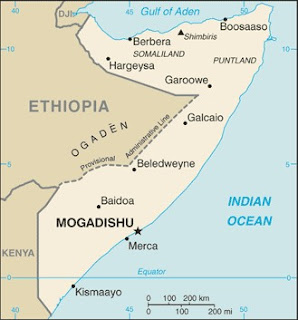 December 15, 2010: Rival Islamic terror groups Hizbul Islam and al Shabaab continue their civil war, pushing each other out of towns in villages in southern Somalia. Al Shabaab is a larger group, but is itself torn by internal divisions and unruly commanders. While al Shabaab has the benefit of several hundred foreign Islamic radicals (who are either more experienced, or simply more fanatic), most Somalis resent these foreigners, even if they are devout Moslems. More to the north of this mess, the Sufi Ahlu-Sunnah Waljama militias battle al Shabaab, which likes to torment Sufis for not being Moslem enough. The Sufi group is still allied with the TNG (Transitional National Government), which is strongest in central Somalia. All four of these groups are loose coalitions, often very loose, and sometimes coalition factions fight each other. Welcome to Somalia.
The fighting continues in Mogadishu, where al Shabaab, sometimes assisted by Hizbul Islam, have been trying to conquer the city, which is the traditional national capital. Currently, with more AU peacekeepers moving into Mogadishu, and al Shabaab suffering more internal problems, and attacks from Hizbul Islam and Sufi militias, al Shabaab has been losing ground. There have been more surrenders of al Shabaab fighters, or defections of small groups to competing militias. All these groups have to worry about their fighters being called away by clan feuds. These regularly turn violent, and result in major gun battles.
It was revealed that, nine days ago, another al Shabaab commander in Mogadishu was killed. Like many other such leaders, this guy, Rajah Abu Khalid, was a Yemeni member of al Qaeda. Islamic terrorists are fighting on both sides of the Gulf of Aden to turn Somalia and Yemen into bases for Islamic terrorism. More and more Islamic terrorists are heading for Somalia, because it's marginally safer. But it's still a struggle, and it's more difficult to get into and out of Somalia.
While the AU peacekeepers are seen as a possible solution to the mess in Somalia, but there are problems here as well. Uganda, which supplies most of the AU infantry, has had corruption problems in past peacekeeping operations. While there's not much to steal in Somalia, there are opportunities. For example, the Ugandan government took $200 of the $750 a month the AU pays for each peacekeeper. The AU suggests that governments take only $100 a month. This is what Burundi (which supplies nearly half the AU force in Somalia) does, and this has caused morale problems among Ugandan peacekeepers. Under pressure from the AU, Uganda agreed to only take $100 a month. But there are other opportunities for ambitious and corrupt Ugandan commanders. This was demonstrated in Congo, where Uganda had peacekeepers stationed for years. Ugandan commanders and troops took every opportunity to make something on the side. Higher ranking officers took control of mining and lumbering operations. Lower ranking troops took whatever opportunities they could, which included prostitution, smuggling or even extortion and outright theft.
Then there is the involvement of Uganda (the younger brother of the Ugandan president-for-life) in the formation of a thousand man coast guard in Puntland. Foreign trainers and equipment is involved, and the cash is coming from a Gulf Arab nation. Kind of scary, but at this point, any help in controlling the pirates is an easier sell. This mercenary coast guard operation is very secretive, so it's unclear exactly what they plan to do. On one extreme, they could go old-school and shoot on sight any suspected pirates. Until the traditional anti-piracy laws were repealed after World War II, this was how you handled outbreaks of piracy. On the other extreme, the new coast guard could try to intimidate the pirates, firing only when fired on. This would slow down the piracy, but not stop it. But it would also avoid a lot of bad press, as the media, some NGOs and many nations are ready to pounce (in terms of criticism) if there is any indication that innocent (or even semi-innocent) seafarers are being killed by these mercenaries.
As more merchant ships are seized along the East African coast, people ashore are feeling the impact. Ships taken often contain shipments of goods people in the nearby country cannot easily find a substitute for. Since it takes at least three months to arrange ransom and free the ship, prices for the goods on that ship go up 10-20 percent or more in the African country the ship was headed for, at least for a month or so. For international traffic passing through the Gulf of Aden, ships carry goods that are more easily, and quickly, replaced. But for East Africans, the impact of the pirates is more immediate and personal.
December 11, 2010: Somali pirates are getting closer to the Indian coast. Today, a 70,000 ton cargo ship was seized about 900 kilometers from the west coast of India, and over 2,000 kilometers from Somalia. The pirates have calculated that the payoff is larger if they try to get more mother ships (sea going ships, often hijacked fishing boats carrying or towing speedboats) way out to sea. There, the mother ships are harder to find. The pirate gangs are believed to have contacts in shipping companies, where a sufficient bribe will provide the course of merchant ships that can be intercepted at night and hijacked. This year, the pirates have taken ships as far as 2,300 kilometers from the Somali coast. The pirates are also working their way down the African coast, towards South Africa, and north into the Red Sea. The pirates apparently will go anywhere the anti-piracy patrol ships and aircraft are not.
December 8, 2010: In Puntland, police caught up with and killed two al Shabaab assassins who had earlier tried, and failed, to kill a senior government o StrategyPage.com
Posted by Unknown at 10:06 AM