Nicholas D. Kristof
What’s the ugliest side of Islam? Maybe it’s the Somali Muslim militias that engage in atrocities like the execution of a 13-year-old girl named Aisha Ibrahim. Three men raped Aisha, and when she reported the crime she was charged with illicit sex, half-buried in the ground before a crowd of 1,000 and then stoned to death.
That’s the extremist side of Islam that drives Islamophobia in the United States, including Congressional hearings on American Muslims that House Republicans are planning for next year.
But there’s another side of Islam as well, represented by an extraordinary Somali Muslim woman named Dr. Hawa Abdi who has confronted the armed militias. Amazingly, she forced them to back down — and even submit a written apology. Glamour magazine, which named Dr. Hawa a “woman of the year,” got it exactly right when it called her “equal parts Mother Teresa and Rambo.”

Dr. Hawa Abdi runs a hospital in Somalia and stands up to extremists there.
Dr. Hawa, a 63-year-old ob-gyn who earned a law degree on the side, is visiting the United States to raise money for her health work back home. A member of Somalia’s elite, she founded a one-room clinic in 1983, but then the Somalian government collapsed, famine struck, and aid groups fled. So today Dr. Hawa is running a 400-bed hospital. 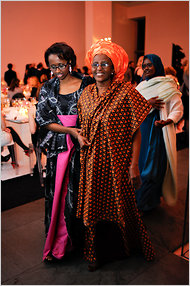 Over the years, the hospital became the core of something even grander. Thousands and thousands of people displaced by civil war came to shelter on Dr. Hawa’s 1,300 acres of farmland around the hospital. Today her home and hospital have been overtaken by a vast camp that she says numbers about 90,000 displaced people.
Dr. Hawa supplies these 90,000 people with drinking water and struggles to find ways to feed them. She worries that handouts breed dependency (and in any case, United Nations agencies can’t safely reach her now to distribute food), so she is training formerly nomadic herding families to farm and even to fish in the sea.
She’s also pushing education. An American freelance journalist, Eliza Griswold, visited Dr. Hawa’s encampment in 2007 and 2008 and was stunned that an unarmed woman had managed to create a secure, functioning oasis surrounded by a chaotic land of hunger and warlords. Ms. Griswold helped Dr. Hawa start a school for 850 children, mostly girls. It’s only a tiny fraction of the children in the camp, but it’s a start. (Ms. Griswold also wrote movingly about Dr. Hawa in her book “The Tenth Parallel: Dispatches from the Fault Line Between Christianity and Islam.”)
In addition, Dr. Hawa runs literacy and health classes for women, as well as programs to discourage female genital mutilation. And she operates a tiny jail — for men who beat their wives.
“We are trying an experiment,” she told me. “We women in Somalia are trying to be leaders in our community.”
So Dr. Hawa had her hands full already — and then in May a hard-line militia, Hizb al-Islam, or Party of Islam, decided that a woman shouldn’t run anything substantial. The militia ordered her to hand over operations, and she refused — and pointedly added: “I may be a woman, but I’m a doctor. What have you done for society?”
The Party of Islam then attacked with 750 soldiers and seized the hospital. The world’s Somalis reacted with outrage, and the militia backed down and ordered Dr. Hawa to run the hospital, but under its direction.
She refused. For a week there were daily negotiations, but Dr. Hawa refused to budge. She demanded that the militia not only withdraw entirely but also submit a written apology.
“I was begging her, ‘Just give in,’ ” recalled Deqo Mohamed, her daughter, a doctor in Atlanta who spoke regularly to her mother by telephone. “She was saying, ‘No! I will die with dignity.’ ”
It didn’t come to that. The Party of Islam tired of being denounced by Somalis at home and around the world, so it slinked off and handed over an apology — but also left behind a wrecked hospital. The operating theater still isn’t functional, and that’s why Dr. Hawa is here, appealing for money (especially from ethnic Somalis). She has worked out an arrangement with Vital Voices, a group that helps to empower female leaders, to channel tax-deductible contributions to her hospital.
What a woman! And what a Muslim! It’s because of people like her that sweeping denunciations of Islam, or the “Muslim hearings” planned in Congress, rile me — and seem profoundly misguided.
The greatest religious battles are often not between faiths, but within faiths. The widest gulfs are often not those that divide one religion from the next, but those between extremists and progressives within a single faith. And in this religious season, there’s something that we can all learn from the courage, compassion and tolerance of Dr. Hawa Abdi.