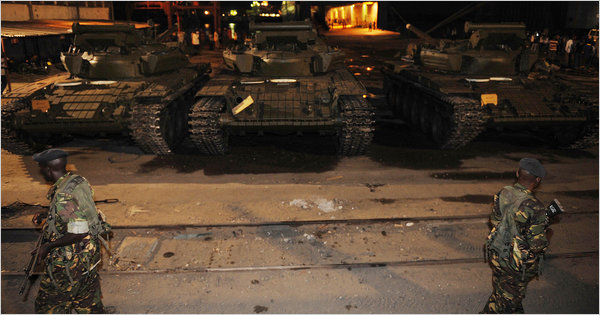 Tony Karumba/Agence France-Presse — Getty Images
Feb. 14, 2009 | MOMBASA, KENYA | Kenyan security officers stand guard over Soviet made T-72 tanks after they were offloaded from a Ukranian ship captured by Somali pirates.
KHARTOUM, Sudan — It was September 2008 and a band of Somali pirates made a startling discovery.
The Ukrainian freighter they had just commandeered in the Gulf of Aden was packed with weapons, including 32 Soviet-era battle tanks, and the entire arsenal was headed for the regional government in southern Sudan. The Ukrainian and Kenyan governments vigorously denied that, insisting that the tanks were intended for the Kenyan military.
“This is a big loss for us,” said Alfred Mutua, a spokesman for the Kenyan government, at the time.
But it turns out the pirates were telling the truth — and the Kenyans and Ukrainians were not, at least publicly. According to several secret State Department cables made public by WikiLeaks, the tanks not only were headed to southern Sudan, but they were the latest installment of several underground arms shipments. By the time the freighter was seized, 67 T-72 tanks had already been delivered to bolster southern Sudan’s armed forces against the government in Khartoum, an international pariah for its human rights abuses in Darfur.
Bush administration officials knew of the earlier weapons transactions and chose not to shut them down, an official from southern Sudan asserted in an interview, and the cables acknowledge the Kenyan officials’ assertions that they had kept American officials informed about the deal. But once the pirates exposed the arms pipeline through Kenya, the Obama administration protested to the Ukrainian and Kenyan governments, even threatening sanctions, the cables show.
Vann H. Van Diepen, a senior State Department official, presented the Ukrainians with a sales contract that showed southern Sudan as the recipient, according to a November 2009 cable from the American Embassy in Kiev. When they dismissed it as a forgery, Mr. Van Diepen “showed the Ukrainians cleared satellite imagery of T-72 tanks unloaded in Kenya, transferred to railyards for onward shipment, and finally in South Sudan,” the cable said, referring to the early deliveries of the weapons. “This led to a commotion on the Ukrainian side.”
The United States’ shifting stance, on policy and legal grounds, on arms for southern Sudan is illuminated in the State Department cables, which were made available to The New York Times and several other news organizations.,..more

an. 22, 2010.
Two of the 66 captives released from Guantánamo by the Obama administration are confirmed recidivists, according to the report. Another three are suspected of turning to terrorism or insurgent activities.
The Obama-era releases break down to 38 people resettled in 16 countries such as Albania, Bermuda, Slovakia and Switzerland.
Another 26 were repatriated to Afghanistan, Algeria, Britain, Chad, Iraq, Kuwait, Saudi Arabia, Somaliland and Yemen. The Obama administration also sent two Tunisians to Italy for trials.
Transfers are currently at a standstill. The White House, for the most part, suspended plans to repatriate Yemeni captives after a Nigerian captured in the botched Christmas Eve ``underwear bombing'' attempt on a Detroit-bound airliner was linked to Yemen's al Qaeda faction.
The last two Guantánamo captives to be released were Arabs sent to Germany for resettlement in September.
Still, the deputy national security advisor reiterated that it is a White House goal to empty the controversial detention center, which opened on Jan. 11, 2002.
``The President and our military commanders agree that closing the prison at Guantánamo is a national security imperative in the war against al Qaeda,'' Rhodes said. ``The President has also made it clear that he will move toward that goal in a way that best protects the American people.''..more  Documents Confirm Shipments of Tanks to Sudan - NYTimes.com
Posted by Unknown at 8:24 PM