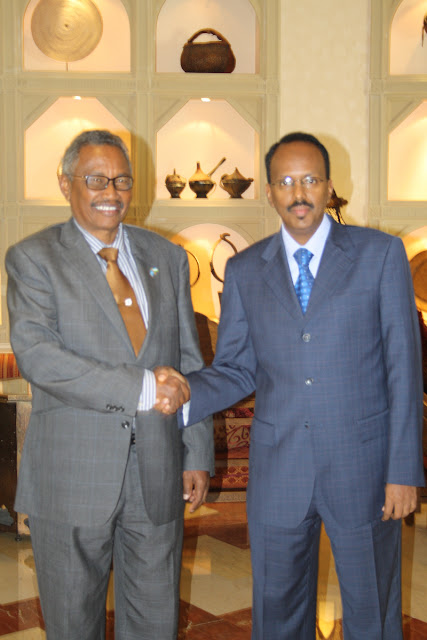 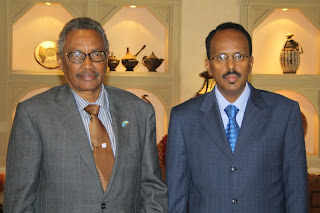 DJIBOUTI CITY, Djibouti –The newly-appointed Prime Minister of the Transitional Federal Government (TFG) of Somalia, H.E. Mohamed Abdullahi Mohamed (Farmajo)I had a long, serious talk with.Puntland region of somalia Leader Abdirahman Mohamed Mohamud (Farole), in Djibouti, Puntland delegation in Djibou which includes Puntland’s Interior Minister Hon. Abdullahi Ahmed Jama (Ilkajir), were en route to returning home to Puntland after a successful trip to Kenya, Kuwait and the United Arab Emirates.On Monday, the two leaders met for the first time face-to-face in Djibouti City. Prime Minister Farmajo and his delegation, which includes the TFG Foreign Minister and Finance Minister, Hon. Mohamed Abdullahi Oomar and Hon. Hussein Abdi Halane, respectively, were travelling to attend the 5th International Conference on Federalism, being held in Addis Ababa, Ethiopia.Puntland’s State Minister for Democratization Process and Federal Affairs, Hon. Abdi Hassan Jimale, is also attending that same conference in Addis Ababa along with a Federalism Expert from Puntland.
The two leaders were initially joined in an informal meeting by the delegation members for introductions, but they subsequently held a closed-door meeting which lasted for one hour. Discussions included how to cooperate on key issues, namely security, decentralization, and completion of the transitional tasks.
It was the first time Puntland President Farole met with the new TFG Prime Minister Farmajo since the latter’s appointment in October.
The two main base sites for pirates are Puntland & Galmudug region  of somalia.
END
The Trouble with Pirates
The President of Puntland, Abdirahman Farole, appoints son as his media director
Somalia’s Separatist media committed to spread baseless stories
Posted by Siad barre at 10:34 AM