A deadly fight between Ahlu Sunna and Al-Shabaab militant group has on Monday erupted in parts of El-bur district, reports say.The fighting reportedly broke out after heavily armed militants ambushed Ahlu Sunna convoy in an area between Wara-dumale and Dagah-yale areas of El-bur district, Galgadud region.Although the exact number of casualties on both sides still remains unknown, Ahlu Sunna’s area district security boss Abdi Hassan Mohamed claimed victory, saying they killed seven militants fighters and seized weapons.He said one of their militias sustained minor injuries adding that they repulsed the militants who ambushed their convoy.Al-Shabaab militants have been launching guerrilla attacks on Ahlu Sunna bases since they were driven out of El-bur town few weeks ago.

A fierce fighting has reportedly erupted between Somali troops and Al-Shabaab militant group in Beledweyne town on Sunday night.The fighting occurred when heavily armed militants launched attacks on a government military base on the outskirt of the city.Hiran deputy regional governor Ahmed Osman Abdalle told terror free somalia  that Al-Shabaab militants attacked their base prompting a deadly gunfire in the area. He said their forces repelled the attackers.Although the exact number of casualties still remains unknown, Abdalle claimed that eight militants were killed during the gun-battle and only three of their soldiers sustained light injuries. 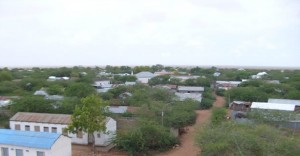 Locals in central Somali town of Beledweyne have for the first time in two decades voted in a new mayor, reports say.In hotly contested mayoral election, Mohamed Hassan Nuriye garnered 135 votes against two of his rivals who got 11 and 8 respectively.Two hundred delegates from all walks of life took part in the mayoral election. His deputy was also voted in after getting 147 out of the 200 votes.Announcing the result, the head of elections in Hiran Eng. Sadaq Omar Sabriye said the election was free and fair, saying that there were no tribalism and nepotism during the election.The newly elected mayor thanked the electorates promising to work as per their expectations.Elsewhere, the regional authority has named a new district commissioner for Mahas district.
Posted by Siad barre at 2:22 PM