Can Fomer Somali Defense Minister, Member of Parliament Colonel Barre Adan Shire (Barre Hirale), Help TFG-KDF Take Kismayo? Yes , In Our Opinion he is the only one that Can Defeat Domestic and International Terrorists in the Jubbaland region of Somalia 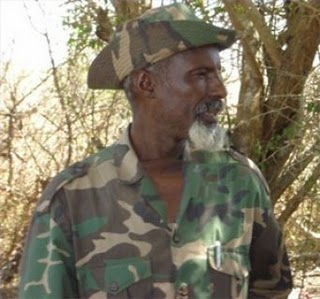 Hirale, also the former leader of Juba Valley Alliance (JVA), has been in Dolow, home to an Ethiopian training camp in southern Somalia bordering Ethiopia, for the last two years.
Colonel Barre was accompanied by Colonel Aden Mohamed Wacey (Adan Koronto) and number of his special staff. While the Ethiopians said he was free to leave at anytime, sources close to him told terror free Somalia  that some of his former militia men planned the escape, hiding him in a car fleeing Dolow. The Ethiopians, however, were fully aware of his departure, the source stressed.
“The MP has taken a long journey from Dolow and is now safe and with the army in El Wak and under the guard of his militiamen," said another source.
The Colonel was not on good terms with Ethiopia after Ethiopian forces detained Hirale in May of last year over disputes about how to conduct military operations and then released him a month later in June 2011.
Hirale is vital to politics in southern somalia because he controlled the city port of Kismaayo for eight years. People see that he is key military strategist and strong political player in Juba and Gedo regions because of his popularity and the massive support he has in Kismayo, one that might be able to turn the side against al-Shabaab, which now controls the port city.
News of his arrival in El Wak has been met with skepticism, speculation and joy. Unconfirmed reports suggested there was a new relationship between Bare Hirale and KDF officials. Somali political experts believe that with Hirale Kenya has now received a key military strategist and strong political player in the southern Somalia. Ethiopia, on the other hand, doesn't want to see Hirale in charge of Kismayo, a vital commercial city."Hirale and Ethiopia have been on bad terms since he arrived in Dolow when he was arrested in 2011. Then he was released after some time, he was not happy staying there. He made several contacts with the Kenyan government, but those contacts failed for many reasons, but he didn't hesitated to continue contacting the government. Finally they had made some kind of good agreement, and that is why right now he is with the TFG and KDF forces," Colonel Warfaa, TFG Spokesman in Gedo and Juba region, told terror free somalia.
Meanwhile, TFG forces celebrated his return."Barre arrived in the district late yesterday with some of his guard and TFG forces welcomed them. Mr. Hirale addressed the soldiers and encouraged them to continue their fight against the al-Shabaab militants. Barre had a meeting with the commanders of the TFG and we have discussed in that meeting military issues," said Colonel Warfaa."We are very glad he arrived. We welcomed him with open hands and hearts. He is a member of the Somali parliament also he is a good military strategist so he can lead us. We do not have a problem with him and he is endorsed by our forces," added the colonel. Hirale is from Marehan, a sub clan of Darod, and is a current MP has a strong force of about 800 men, trained and equipped by Ethiopia which fights against al-Shabaab in Gedo region. They are mainly from the Marehan clan and although they use Ahlu Suna Wal Jamaa as their cover, they are considered as both clan militia and TFG force.

By Rahm  HOT TIP H/T from allgalgaduud
Posted by Unknown at 9:05 PM