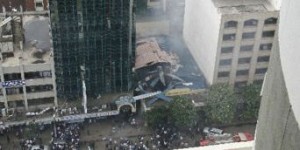 The scene of the explosion on a busy road in downtown Nairobi, Kenya

At least 30 people have on Monday been injured after a blast exploded in a building in central Nairobi. There are fears that some people might have been killed in the explosion.Kenya police and firefighters sealed off the area before the injured people were rushed to Kenyatta National Hospital for treatments.There are still confusion over the exact cause of the blast, however, Kenya police chief, Mathew Iteere said in a press conference that an electric fault might have caused the blast.The assistant for Kenya interior security minister, Orwa Ojode, said that the police will investigate a possible bomb blast.There has been a heavy traffic jam in the city center after police condoned off Moi Avenue and forced car drivers to use alternative routes. 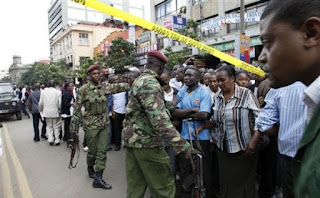 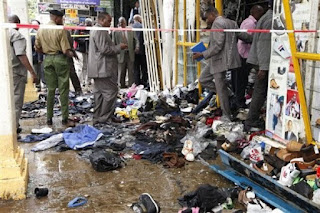 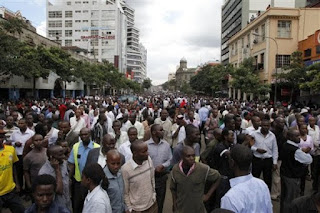 An explosion ripped through a building full of small shops in downtown Nairobi on Monday, wounding at least 30 people, the police commissioner said.He could not immediately say what caused the early morning blast that sent smoke billowing out of the building and over the city. Items for sale in the shops — like shoes and clothes — were scattered on the ground.People with bloody wounds received medical care, as authorities tried to usher hundreds of people in the street away from the scene. Security blocked off areas around the building with yellow tape.The force of the explosion ripped apart the one-story building's aluminum roof, but a high-rise building with a glass exterior right next to the blast did not appear to sustain major damage.Police Commissioner Mathew Iteere said at least 30 people were wounded. Another high-ranking police official said there were no obvious signs that the blast was caused by a terrorist's bomb. No ball bearings or nails — lethal shrapnel packed into bombs — were found, and officials were investigating the possibility that a faulty electrical line caused the explosion. The official said he could not be quoted by name."Let me not speculate this is a terrorist attack. It could be a wire fault," said another official Orwa Ojode, assistance minister for internal security. Al-Shabab militants from neighboring Somalia have long threatened to carry out substantial attacks in Kenya following Kenya's decision last October to send troops into Somalia to pursue al-Shabab militants.
Kenya has suffered a series of grenade attacks in recent months, but Monday's blast appeared to have been caused by something larger than a grenade.

We will update this thread with new information as it becomes available.

Rahm- Terror Free Somalia
Posted by Siad barre at 7:30 AM