Somalia's Transitional Federal Government is making preparations to hand over power to an elected government in AugustThe surprising development is being engineered by a Somali-American technocrat intent on ending his native country's reputation as a failed state.

Somalia's Prime Minister Abdiweli Mohamed Ali is a man with a mission. 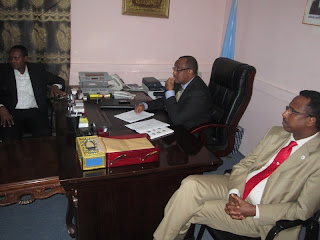 The Harvard-educated Ali could easily go back to his wife and four children and his career as an academic in the United States. A month ago, he narrowly escaped an assassination attempt that killed two of Somalia's top sports officials.Instead he has chosen to take on what some might call “mission impossible,” returning stability to Somalia after more than 20 years of lawlessness and conflict.Just a few months ago, southern Somalia was in the grip of drought and famine. Much of the countryside was controlled by al-Shabab, an Islamic extremist group that refused to allow Western aid agencies to provide life-saving food aid. As a result, thousands of Somalis died.

Today, al-Shabab's grip is broken, due partly to public anger at their callousness, and partly to a African Union-led military force that hit them when they were at their weakest.A few weeks ago, al-Shabab fighters were forced to pull out of their last few positions in Mogadishu. Prime Minister Ali sees the political vacuum created by al-Shabab's departure as an opportunity for his U.N.-backed government, which until recently was seen as weak, corrupt and incompetent."We gained a lot of territory from Shabab. They're on the run, and Somalis came to understand they have no tolerance," he said. "They don't have a Somali agenda. Their agenda is an obnoxious agenda. Shabab lost the hearts and minds of the Somali people. They lost the battle and also lost the war."


Ali and his crew of Western-educated technocrats are racing against the clock to create a constitutional government for Somalia by August, when his administration's mandate expires. Two weeks ago they finished drafting a new constitution. In technocratic form, Ali expresses confidence that he can succeed where others have failed by strict adherence to a timetable."We have a 'road map.' You know why previous governments failed was because they never had a framework that guides them, that takes them from where they were and to where they want to be," he said. "Now we have a framework. The road map has benchmarks, timelines and deadlines of doing specific jobs. That's why we've succeeded."

The next steps include forming a convention of elders to select a constitutional assembly that will ratify the constitution. The assembly will then choose members of a slimmed-down parliament that will elect a speaker and a president by July.

The new government would then be ready to take power by August, when Prime Minister Ali's mandate expires. It's a tall order, but he says the progress made in the past few months suggests it can be done.
"Nobody would have thought seven months ago that the whole city of Mogadishu would be secured and safe," he said. "We are a proud country with rich history. We'll get out of this mess and hopefully in the near future you will have a Somalia at peace with itself and its neighbors."

Ali says al-Shabab may continue for some time to be able to stage sporadic terrorist attacks like the one this week that killed two members of parliament. But he envisions a state that within five years will become a solid member of the community of nations, something that has evaded Somalia for more than two decades.