Draft Constitution: An instrument for balkanization and brutalization of Somalia

The people of Somalia face the looming dreadful reality of becoming a vanished nation/country because of the Draft Constitution soon to be rubber stamped through fraudulent political and legal process. As usual, the International Community and the media will join force to publicize the new constitution as a success story for Somalia. In contrast, the Draft Constitution is an instrument for balkanization and brutalization of Somalia on basis of the following reasons:

It repeals the 1960 constitution in force which represents the legal and political foundation or the birth certificate of the Somali State/nation. The 1960 constitution embodies the basis for the admission of independent Somalia to the United Nations, International Monetary Fund, World Bank and the Organization of African Unity. It partitions the country into three territories-Somaliland, Puntland and South Central. In accordance with article 172, it binds specifically the South Central Somalia, while Somaliland and Puntland adopted separate constitutions drafted with the help of the International community. For this reason, the Draft Constitution omitted the demarcation of the national borders of Somalia, while the constitutional demarcation of national borders is imperative at this historical moment. It is not ending the transitional period extended after August 2012 for four more years during the Garowe Conferences. Also, it has nothing to do with the political dispensation for the establishment of new parliament and the election of national leaders. It introduces ideas, culture and values that could intensify the social and political tension within the Somali society. It weakens the commonality and amplifies the diversity among the Somali communities. It embeds multiple sources of conflict and confusion detrimental to the governance of Somalia so that the latter will vanish as a nation and country. It ignores the need for soul searching national reconciliation before drafting national constitution. A national consensus on the causes and effects of the civil war and the collapse of the Somali State is paramount for enduring peace in Somalia. It is immoral and political crime to draft a new constitution under the prevailing political and security conditions in Somalia.It fails to articulate a national vision and a workable national and local system of governance. There is strong belief that instead of federalism decentralization suits best Somalia’s needs for democratic and efficient governance. What is crucial for the Somali people is to negotiate in good faith a workable and hierarchical system of national and local governance that is accountable, trustworthy, sustainable, equitable and self sufficient. It lacks clarity, simplicity and practicability. It is written as a policy diktat paper. It devalues the Somali Citizenship and Somali Nationalism. It is not prepared in adherence to the provisions of the Transitional Federal Charter and in accordance with the required constitution-making process which is completely different from the process of making a law. The critical evaluation of the timing, the role of the international actors, the legitimacy of the process and persons responsible for drafting the constitution, the genuineness of public participation, and the role of the national authority is an important condition for the acceptance or rejection of a constitution. Particularly, the case for Somalia as a failed State requires high attention to legitimacy, stakeholders, participation, and transparency. Prof. Abdiwahid SheikhOsman Qalinle put it eloquently when he said, “Normally, the constitution-making process is a jealously guarded national treasure everywhere else but Somalia.” Unfortunately, International actors controlled the entire process.
For the above reasons and others, the overwhelming majority of the people of the “South Central Somalia (90%)” oppose the Draft Constitution. Similarly, the majority of the participants in the consultation draft constitution organized for the Somali Diaspora living in Minneapolis and Columbus expressed their objections to the Draft Constitution. The feedback from the consultations in Europe is the same. In general, the public questioned the motives behind the campaign for a new constitution.The participation of personalities from Puntland and Somaliland in the upcoming Constituency Assembly or new parliament serves only the purpose of muddling the Somali political situation. The agenda for outreach, unity, power-resource sharing on the basis of citizenship cannot go along with the agenda for separation, stand alone under Regional States or total independence pursued by Puntland and Somaliland with the collaboration of the international community.On April 24, President Sheikh Sharif of TFG has publicly repudiated the validity of the Transitional Federal Charter and consequently the legitimacy of the Transitional Federal Parliament after electing lawfully new Speaker (President’s Speech). The President belittled the role of the MPs and threatened anyone opposing his propaganda agenda. TFG leaders seem confident about the replay of 2008 Djibouti process by handpicking 225 new members of parliament under the protection and diplomatic support of AMISOM and Ethiopian forces, and with the financial support of donors.On his part, the Prime Minister Prof Abdiweli M. Ali announced the completion of the draft constitution and dismissed the opponents’ views by arguing that 99 % of the critics did not read the constitution. He has yet to publish the final draft of the constitution for transparency and public comment. I bet that TFG leaders did not read the Draft Constitution either. Otherwise they would not have released the unedited first draft of July 2010 for public consultation in March 2012.The rules of engagement of the AMISOM forces, the Kampala Accord and the Ethiopia’s forces have deprived the Somali Citizens including the MPs of their right to challenge their notorious incompetent and corrupt leaders. A corrupt political system of governance has taken root in “South Central Somalia” with the complicity of the international community. The leaders of Al Shabab and TFG are now using the same threatening language to gain power over the Somali people.It is plainly wrong to believe that the Draft Constitution will secure the actual transition from the transitional government to a permanent one possessing international privileges. Dropping the word “Transitional” will not graduate Somalia from failed state to credible international partner with the right of entering into international agreements or directly receiving bilateral and multilateral foreign aid. Any literate Somali Citizen who wants to believe such claim is someone whose understanding about the legal, diplomatic and economic foundations for international relations and cooperation is limited.

In reality, the Draft Constitution has distracted the people of Somalia from addressing systematically and passionately the causes and solutions of the real problems devastating their country. Today, about half of the Somali population is facing famine, malnourishment and insecurity inside and outside Somalia. The fraudulent approval of the Draft Constitution will be another calamity on Somalia. It is the responsibility of every Somali citizen to avoid the happening of that calamity with all legitimate means. 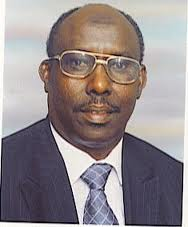