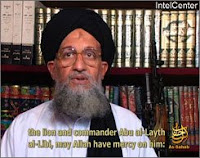 CAIRO (AP) — Al-Qaeda marked the anniversary of the Sept. 11 attacks Monday with an hour and a half video message summarizing the state of jihad, or holy war, around the world and slamming Iran for collaborating with the United States.
In the short excerpts aired on the Arab satellite news channel Al-Jazeera, al-Qaeda deputy leader Ayman al-Zawahri accused Iran of working with U.S. forces.
"The guardian of Muslims in Tehran is cooperating with the Americans in occupying Iraq and Afghanistan and recognizes the two hireling governments there," he said. more..http://www.usatoday.com/news/world/2008-09-08-al-qaeda-video_N.htm?csp=34
Posted by Siad barre at 9:54 AM