Norm Coleman for Second Term in the US Senate

Minnesota Republican whose six years at the US Senate means a great deal for Minnesotans and particularly for Somali Americans who care deeply about their war-ravaged homeland. Senator Norm Coleman has been a strong advocate for Somalia at the US Senate working across party line with Senator Russ Feingold of Wisconsin who is without a doubt the foremost expert on African Affairs and Somalia in particular at the US Senate. Among his accomplishments at the US Senate, Senator Coleman spearheaded the effort to name a special envoy to Somalia, highlighting its importance in the US government and co-sponsored much needed legislation favorable to Somalia. Unlike senators from states with large Somali-American communities such as Ohio, Virginia, Maine and others, this senator from Minnesota has been actively and visibly working for Somali-American families in his state on many issues ranging from family reunification challenges to establishing a sound US foreign policy toward Somalia. Senator Coleman, who is a former Democrat turned Republican, is an honorable man who cares deeply about the plight of Somali Americans in his state and an ardent advocate for Somalia. He is the first US Senator to recruit a Somali-American liaison in his office. Regrettably, his association with the Bush administration’s foreign policy failures in the Middle East and in the Horn of Africa and particularly US support for Ethiopian incursion into Somali territory is his biggest liability with Somali-American voters. It is rather impossible to find a candidate in which the Somali-American community may agree with on all the prevailing issues 100% of the time. However, when one compares Senator Coleman’s record of public service to his constituents and the challenges they face as they began a new journey in America, as well as his commitment to improve humanitarian assistance to millions suffering in Somalia, his competition will no doubt pale in comparison. Even though there is an overwhelming desire for change in Minnesota and elsewhere in America, we believe that Senator Coleman’s six-year record in the US Senate should outweigh any concerns about his party affiliation. The good senator from Minnesota, we believe, deserves a second term in the United States Senate. 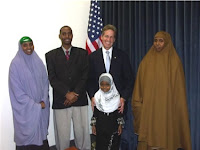 Senator Coleman meets with 5-year-old Fartuun Sheikh and family On Friday, October 21st, Senator Coleman met with 5-year-old Fartuun Sheikh and her family at his St. Paul office. In September, Coleman helped secure Fartuun's return to her family in St. Paul after she was wrongly detained by Kenyan Immigration Authorities during a trip to visit relatives with her grandmother.
Posted by Siad barre at 8:33 AM