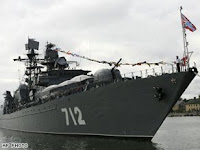 Pirates who seized a Ukrainian vessel loaded with tanks and weapons off the African coast have lowered their ransom demand to $5 million.Russia has sent this frigate to the Somalia coast following the hijacking of a Ukrainian ship. The pirates initially demanded $35 million and no military action, said Andrew Mwangura of the Kenya Seafarers Association. They later decreased their demands for several reasons, Mwangura said. more..http://edition.cnn.com/2008/WORLD/africa/09/27/somalia.piracy.ukraine/index.html

Russian Warships Head To Intercept Pirates
Somalia's notorious pirates have staged perhaps their most brazen attack yet, seizing a Ukrainian ship full of arms, including 33 battle tanks, and a U.S. ship was in pursuit.
The ship was seized Thursday evening about 200 miles off the coast of Somalia, and it is feared that the heavy weapons could fall into the hands of insurgents who are wreaking havoc on a country teetering on the brink of a humanitarian catastrophe.
The ship was carrying 33 Russian T-72 battle tanks, which were going to be offloaded in Mombasa, Kenya, said Andrew Mwangura, the program coordinator of the Seafarers' Assistance Program in Kenya. more..http://www.cbsnews.com/stories/2008/09/26/world/main4481970.shtml
Somali pirates release Egyptian ship
http://www.iol.co.za/index.php?from=rss_East%20Africa&set_id=1&click_id=87&art_id=nw20080927152423517C550336

How To: Take Down Somali Pirates

The U.S. Navy destroyer Howard continues to shadow the Ukrainian vessel Faina, which Somali pirates seized last week. Faina is loaded with around three dozen T-72 tanks and other weapons reportedly bound for Kenya. "Howard is on-station," Commander Curtis Goodnight, Howard's skipper, told a Navy reporter. "My crew is actively monitoring the situation." The destroyer has even established unspecified "bridge-to-bridge" comms with the hijacked ship more..http://blog.wired.com/defense/2008/09/seals-option-fo.html
Posted by Siad barre at 12:59 PM