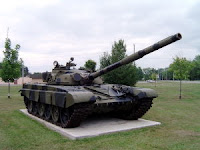 Somali pirates have seized a Ukrainian ship carrying at least 30 tanks and some Russian crew, a maritime group said on Friday, and Russia announced it was sending a warship to the region to combat piracy.The UN World Food Program said Canada had also extended its vital naval escorts of food aid shipments for another month.Pirates have captured more than 30 vessels off Somalia this year, making its waters the most dangerous in the world and threatening a globally important shipping lane between Europe and Asia. The gangs seek, and often get, large ransoms. The East African Seafarers' Assistance Program said the Ukrainian ship seized on Thursday was carrying tanks. Ukrainian news agency Interfax-Ukraine also said the ship, under a Belize flag, had a military cargo "including about 30 T-72 tanks". more..http://www.abc.net.au/news/stories/2008/09/26/2375796.htm
Somali pirates 'seize 30 tanks' http://news.bbc.co.uk/1/hi/world/africa/7637257.stm
Russia navy to combat piracy off African coast
MOSCOW (Reuters) - Russia's navy has sent a warship to Somalia's coast to combat pirates and will mount regular anti-piracy patrols in the area, a navy spokesman told Russian state television on Friday."In the future the Russian navy will send its ships on a regular basis to zones where there is a danger from maritime piracy," navy spokesman Igor Dygalo told the Vesti-24 television station.He said one Russian warship left its base on the Baltic Sea on September 24 heading for the area off Somalia's coast to tackle pirates operating there
Posted by Unknown at 7:12 AM