US Embassy Nairobi, Kenya September 16, 2008
- The week of August 25th through the 29th marked the first of major student workshop held in Beled Hawa for school boys and school girls in the gedo region jubbaland state of somalia. The workshop had a wide

for school boys and school girls from

GEDO (jubbaland state) The workshop’s opening and closing ceremonies were headed by the Mandera District Commission, Kenya and were lent a helping hand by the active representatives of Beled Hawa city known as the Gedo Administration. Educators, parents, locals, from jubbaland state of somalia political and religious 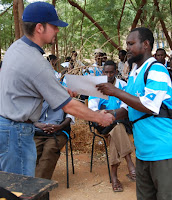 dignitaries from both Mandera and Beled Hawa were in attendance for the opening ceremonies of the youth workshop.
The workshop was almost entirely organized by seven staff members at the local U.S embassy and the initiative was led by the Public Diplomacy Officer for Somalia, Mr. Mark Zimmer.
The embassy also provided funding for the workshop; paying for staff, accommodations and meals and other expenses during the five day seminar.
There were over 50 participants in the youth orientated seminar in total. 17 of which were from the Kenyan side of the border. The boys and girls were led to their separate accommodations. The boys were staying at the local secondary school for boys; the females at the secondary’s sister school. The workshop had a wide ranging and eventful agenda for the lucky 50 students who were selected by merit. Activities included: Quran recitation competition, football (soccer) matches, volleyball, handball, arts and crafts, poetry writing contests, and essay writing contests. The workshop also gave the students a chance to voice their opinion while having an open forum style discussion with the embassy officials. Some of the topics covered were the possibility of co-existence, non violence, U.S – Somalia friendly relations, education, career development and the role of youth in the peace process.
At the programs conclusion, it was not only the children who left with a sense of accomplishment and fulfillment; but rather everyone involved took something with them from that unique experience. The U.S Embassy was extremely satisfied with the workshop and its results.