U.S. student, husband among dead in embassy attack in Yemen 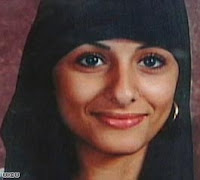 CNN) -- Eighteen-year-old Susan El-Baneh and her husband of three weeks died holding hands, her brother said, victims of a terrorist attack Wednesday on the U.S. Embassy in Yemen.
American citizen Susan El-Baneh, 18, and her Yemeni husband of less than a month were killed in the attack. The Lackawanna, New York, native, a high school senior, had gone to the Arabian Peninsula country a month ago for an arranged marriage. She and her husband were in the waiting area of the U.S. Embassy in Sanaa, trying to find out the procedure to bring her spouse back to the United States. Susan El-Baneh was the only American killed in the attack.
Some of El-Baneh's family members, who had traveled from Lackawanna with her for the wedding, heard the blasts of the coordinated terrorist attack echo through the city's walls.more.. http://www.cnn.com/2008/US/09/18/yemen.american/index.html
Check out the video attack in Yemen
http://www.cnn.com/2008/US/09/18/yemen.american/index.html#cnnSTCVideo
Posted by Unknown at 12:25 PM