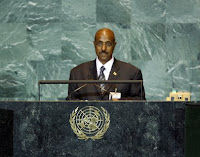 UNITED NATIONS, Sept 29 (Reuters) - Ethiopia demanded on Monday that the U.N. Security Council deploy peacekeeping troops soon in neighboring Somalia, where a conflict has killed and displaced thousands of people since last year.
"We urge the United Nations Security Council to discharge its responsibility by deploying a peacekeeping mission in Somalia as soon as possible or, at least, to allocate the necessary resources to strengthen AMISOM," Ethiopian Foreign Minister Seyoum Mesfin told the U.N. General Assembly. more..http://www.alertnet.org/thenews/newsdesk/N29406072.htm
http://aigaforum.com/seyoum-un2008.html