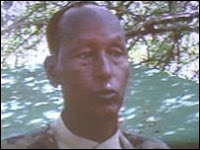 we translate the full bbc interview in english


al shabaab admin 'built in kismayu city.for Jihadists. Terrorist Hassan Turki ..southern Somalia has publicly endorsed a new administration for the strategic port city of Kismayo , Terrorist Hassan "Turki" Abdullahi Hersi, a key figure of al Shabaab, told the BBC Somali Service during a Monday interview that fighting between Islamist guerrillas and http://marehansade.blogspot.com/2007_07_01_archive.html mareehan clan army loyal to jibbaland state of somalia "started by accident." "A part of the jihadis started the war and we knew if we did not support them, that mp Barre [Hirale] Somalia: MP's Against Islamists Jubbaland army will kill them one by one," Turki said, adding: "Kismayo is now under Muslim control." Sheikh Turki defended the new seven-member administration, which disregarded clan sentiment and appointed as city mayor an Islamist official from the Somaliland regions, in northwestern Somalia .
"I get telephone calls with people asking me 'why did you hand over Kismayo to a man from Hargeisa' Somaliland capital," Sheikh Turki said, while defending the new Islamist-appointed administration on grounds that its "founded on Islam" and not the 4.5 clan-based, power-sharing formula, which the country's Transitional Federal Government (TFG) is based on. He also addressed the dispute among members of the Alliance for the Re-liberation of Somalia (ARS), which broke into two wings after ARS Chairman Sheikh Sharif Sheikh Ahmed inked a peace pact with the TFG in June.
"I pray that the two Sheikhs Sharif in Djibouti and Aweys in Eritrea repent to Allah and return...my desire is to become the elder of al Shabaab jihadis," Terrorist Turki said.
"We will defend ourselves against hirale jubbaland army and TFG Somali President Abdullahi Yusuf and everyone and the Ethiopians and we will teach them a lesson," he said, while promising to "continue the jihad."
In March, the U.S. government designated al Shabaab a terrorist organization.
Meanwhile, there have been two fatal shootings inside Kismayo since Sunday, including a local businessman who was shot and killed in public.
In both cases, the killers escaped but the Islamists'


one of the The most Dangerous man Sheikh Hassan Turki Video
Terrorism and Security Monitor
http://youtube.com/

BBC Somali Section, like everything else in our world, is constantly changing. What was once strict ethic of the BBC may be considered as non ethic now.It is unfortunate that the internationally accredited BBC is still accommodating a Somali and permitted him to use the only source of information and news of the Somali people, for his sinister and criminal advocating propaganda internationally. Terrorist Yusuf Garad is a Somali who is t jehadist to be removed like all others were disgracefully chased away from their strong forts. Terrorist Yusuf Garad is using a distant fort called BBC Bush House, where he devours irrationally all news that doesn’t match his wishes. He immorally disregards all information and news that does not serve his purpose, which is clannish in one time, hate propagating and supporting certain factions against others on the other hand. Last year during the time when the extremist Union of Islamic Courts (UIC) controlled many regions of Somalia including the Mogadishu, the capital city; Terrorist Yusuf Garad blatantly sided with his uncle Terrorist Hassan Dahir Aweys who was the Head of the Shura of UIC. He over publicized the UIC out of proportion.Yusuf Garad deliberately publicizes all negative propaganda against the Transitional Federal Government (TFG) and its efforts to bring about a peaceful reconciliation. The reason is simple and clannish; because Abdillahi Yusuf Ahmed is from a different clan. Similarly,one of the The most Dangerous man Yusuf Garad undermined and diluted almost all the positive and reconcilable endeavors of the TFG. He shamefully calls and holds international telephone conferences, by inviting, from around the world, certain elements of the Somali society who share his morbid opinion and casts through the BBC Somali service. He uses the BBC Somali service as a vehicle and tool to proliferate his jehadist religious and political believes.