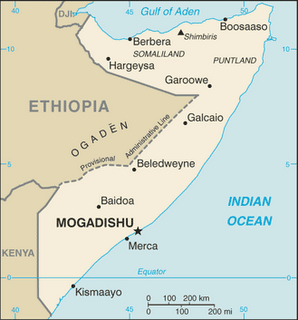 MOGADISHU (AFP) - Heavy clashes Tuesday between pro-government militias and Islamist insurgents fighting for control of the western Somali town of Beledweyn have left at least eight dead, officials and witnesses said.The fighting in Beledweyn, which lies 300 kilometres (185 miles) north of Mogadishu and near the border with Ethiopia, erupted when pro-government forces launched an offensive to wrest back control of the town from insurgents."The allied enemies of Allah who were armed by the Ethiopian government attacked our bases in Beledweynbut we defeated them and killed many of them," Sheikh Mohamed Moalim Harun told AFP by phone from Beledweyn."Their bodies are still strewn across the streets," he added.Harun is a senior commander for the Hezb al-Islam movement, a hardline insurgent group allied with the Shebab, a even more radical Islamist movement whose leader recently proclaimed allegiance to Osama bin Laden.Residents said the clashes, which involved exchanges of machinegun fire and mortar shells, were the worst they had seen in a long time."The fighting was the heaviest Beledweyn has seen recently," local resident Ali Osman told AFP. "I saw eight people killed in the clashes, most of them combatants.""In the morning, the pro-government fighters pushed back the Shebab and Hezb al-Islam militants to the western part of town but they were later defeated and have now left the city," he added."Around eight people have died and many of those residents who had been reluctant to flee the city since this latest round of fighting started late last year are leaving the town today," Abdullahi Ahmed, another resident, said."I don't think anybody will want to stay here after this," he added.Other witnesses gave the same minimum death toll.Pro-government militia commander Adan Buqay confirmed the clashes but could not say how many people died."There was heavy fighting in the town and several people, most of them fighters, were killed but I don't have the detail," he told AFP.The Shebab and Hezb al-Islam took control of most of the city last week after more heavy fighting. They also stormed and looted offices used by two foreign aid agencies. Beledweyn, a key town lying near the border with Ethiopia, has changed hands countless times recently as Hezb al-Islam, the Shebab, the Sufi group Ahlu Sunna wal Jamaa, government forces and various local warlords vie for supremacy.
Posted by Siad barre at 7:44 PM