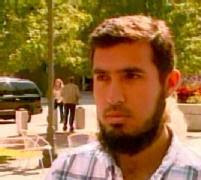 Last September, in the days after he emerged as a central suspect in an alleged Qaeda terror plot, much about the life of Najibullah Zazi became the subject of intense interest.Among the areas of interest were his job as a shuttle driver at the Denver airport; his purchases of beauty supplies that prosecutors say were the ingredients for homemade explosives; and his relationships with relatives, including an uncle by marriage who took Mr. Zazi in when he first moved to Denver from Flushing, Queens.Now, months after Mr. Zazi’s arrest on bombing-conspiracy charges, his uncle, Naqib Jaji, 38, has been secretly arrested in the case. Mr. Jaji, who in his public remarks had indicated some antipathy toward Mr. Zazi, 24, but also said it was “impossible” that he was a terrorist, was arraigned this month in a sealed federal courtroom in Brooklyn, a sign that he may be cooperating in the case...more..
Posted by Siad barre at 2:41 PM