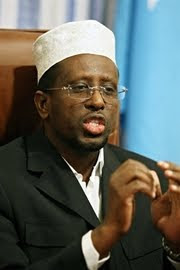 MOGADISHU, Somalia (AP) -- Somalia's president says government troops are ready to launch major military operations this year to expel insurgent groups from the war torn country.President Sheik Sharif Sheik Ahmed spoke late Friday after Islamist insurgents launched multiple attacks on government bases and African Union peacekeeping troops, killing at least 19 people. His speech, however, was broadcast on state radio Saturday because of the attacks.The insurgents also bombed the presidential palace with mortars to disrupt a ceremony marking Ahmed's first year in office. More than 30 people were wounded in the fighting, said Ali Muse, the head of the ambulance service in Mogadishu.Ahmed said the government would defeat al-Qaida and al-Shabab and restore peace and stability to the country.
Posted by Unknown at 6:17 AM