Ethiopian to fly to Toronto 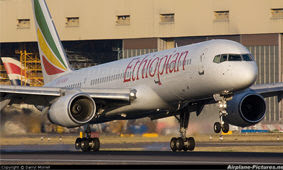 According to the foreign affairs ministry, as per the agreement the Ethiopian will fly to Toronto Twice a Week .A delegation led by the Civil Aviation Authority Director General Col. Wosenyeleh Hunegnaw and Chief Air Negotiator with the Canadian Foreign Ministry Robert Ready have reached agreement after holding discussion on the issue from 4-6 Jan.2010.Addis Ababa, January 22, 2010 (Addis Ababa) The Ethiopian and Canadian Air Service have reached an agreement that would enable the former to fly to Toronto, Capital of Canada early in January.The commencement of the flight will significantly contribute to enhance trade, investment and tourism relations between the two countries.The agreement will respond the request of Ethiopian diaspora in Canada for years, the ministry said.
---END---