The worsening crisis in Somalia is as big a threat to global security as Afghanistan but is being ignored by the world, delegates told an African Union summit on Sunday. 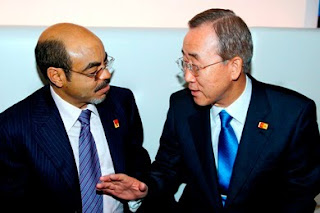 Addis  Ababa Ababa(Ethiopia) The Inter-governmental Authority on Development (IGAD) on Saturday called on the international community to extend its support for the Transitional Federal Government (TFG) of Somalia, which remains within a tense security situation for 18 years.The call was made during IGAD’s 34th extraordinay session held in parallel with the on-going African Union (AU) Commission summitForeign Ministers from Ethiopia, Kenya, Uganda, Djibouti and Sudan attended the session during which they discussed the prevailing situation in Somalia and the Sudan.The Ethiopian Foreign Affairs Minister Seyoum Mesfin, who is also the current chairperson of IGAD said that the international community’s support for peace making efforts in Somalia is crucial.Currently, the Ugandan and Burundi peacekeeping forces are in Somalia under the African Mission In Somalia (AMISOM) to stablize the TFG of Somalia, which is fighting with insurgents and the al Shabab fighters.On the ocassion, IGAD also promised to give appropriate support to the national elections and referendum to be held in Sudan in 2010 and 2011 respectively.
Posted by Unknown at 3:48 PM