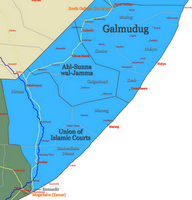 MOGADISHU (Reuters) - Fighting in Somalia between a pro-government militia and hardline Islamist rebels killed at least 16 people and injured 34 others in the central Galgadud region on Wednesday, a rights group said."More people were forced to flee ... This is a violation of civilians' rights," Ali Yasin Gedi, vice chairman of Mogadishu's Elman Peace and Human Rights Organisation, told Reuters.Residents said the clashes took place in the central towns of Warhole and Owsweyne and pitted Ahlu Sunna Waljamaca militia against an alliance of Hizbul Islam and al Shabaab insurgents.Washington says al Shabaab is al Qaeda's proxy in the failed Horn of Africa state, which has lacked a central government for the last 19 years. Both Hizbul Islam and al Shabaab want to impose a harsh version of sharia law on the chaotic country.Bashir Khayre, a resident of Warhole, told Reuters that three injured civilians had died of their wounds as fleeing neighbours tried to carry them to safety in another town."Fighting has now paused, but it is sure to restart because the two groups are not far from each other. The death toll may rise because some injured people ran into the forest," he said.Fighters from Hizbul Islam and al Shabaab have fought each other in the past, but have sometimes teamed up to fight Ahlu Sunna Waljamaca -- which advocates a more moderate version of Islam and supports Somalia's weak Western-backed government.Violence in drought-ravaged Somalia has killed at least 19,000 civilians since the start of 2007 and driven a further 1.5 million people from their homes, helping to trigger one of the world's most acute humanitarian emergencies.
Some background
Death toll in central Somalia fighting rises to 47
Sectarian Fighting Erupts in Central Somalia
Central Somalia fighting leaves 64 dead
At least 27 killed in Somalia clashes
Canadian insurgent 'Asparo' killed in Somalia
Al-Qaedastan
Is promoting Sufi Islam the best chance for peace
death shabaab Terrorist
Al-Shabab Terrorist barbaric court go for arm and leg
Somali mosque blast 'kills many'.Civilians dead in Mogadishu clashes
The Most Dangerous Place in the World
Posted by Unknown at 10:24 AM