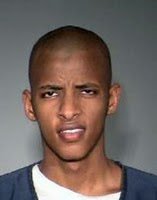 MINNEAPOLIS (AP) - A Somali man who pleaded guilty in Minnesota to a terror-related charge is being released to a halfway house.Abdifatah Yusuf Isse has been in custody since his February arrest at the Seattle airport. He pleaded guilty in April to one count of providing material support to terrorists and is awaiting sentencing.Isse has been cooperating with an investigation into as many as 20 young men who traveled from the Twin Cities to Somalia to possibly fight for terrorists. Court documents show Isse trained with al-Shabab in Somalia.In an order made public Thursday, U.S. District Judge James Rosenbaum ruled Isse would be released to a halfway house when a bed comes available. It was not immediately clear if he was released Thursday. Isse will be on electronic monitoring.His attorney did not immediately return a phone message Thursday
Posted by Unknown at 9:11 PM