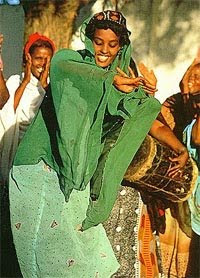 "How can our own culture be 'un-Islamic'?"
Fatma Adow reaches for a remote control to amplify the volume of her music player as she engages a customer in a seemingly funny joke. They talk loudly amid the thundering music from the woofers, and finally the customer parts with a music cassette.
"Try this in Somalia, and that will be the end of you," she said. "You'll be lashed, stoned to death, or forever get shunned,” Fatma said.
Fatma is one of the 25 women, who on November 2008 faced the wrath of militiamen from the Islamic Courts Union for taking part in a folklore dance galore in Shabelle zone, Mogadishu, north of Somalia.
"Charges were opened against us, and we were accused of taking part in an 'un-Islamic event,'" she told IslamOnline.net (IOL). She managed to flee the country and is now operating a music shop in Eastleigh, a Nairobi suburb inhabited by Somalis.
Many Others
Such punishment, according to Fatma, has been meting out to a number of other  Somalia woman musicians."Even our customers and spectators have also been punished for 'wasting' their time and corrupting morals," she added.Lists of edicts have been circulated to a number of media , warning them to trash all secular songs from their broadcasts.Late last year, Radio Warsame, a local private, commercial FM radio station in Baidoa region in southwestern Somalia, was ordered closed indefinitely by Al-Shabab movement, an Al-Qaeda proxy in Somalia."This is unacceptable. We have refused to air their tenets and are now zooming in to media houses from all angles. They have lashed women and imposed 'fatwa' on music. This is barbaric," Abdullah Adan, National Union of Somali Journalists told IOL.Militants who control swathes of the Somalia have banned music in the country. Somalia musical bands are unfastened, and their discarded, and most of illustrious musicians and artists are now hopeless.
Lost Livelihood
"For the last four years, live has been miserable for Somalia women artists. Some have managed to flee to Europe, while others are still stuck in Somalia," said a sympathetic Fatma.Cinema hall owners and event organizers have also lost dollars in the process, Fatma adds. When music was banned in Somalia, people resorted to video, and music halls have been attacked."No one can invest in a shaky business," said Athman Musa, a businessman in Nairobi. "You don't know when they will strike and bomb your packed hall, killing all your customers."In June 2008, one person was killed, and scores were injured at a cinema hall in the capital Mogadishu. As people watched Somalia music videos as grenades were hurled at the building by radical Islamist militias.Before the collapse of the Siad Barre government and the introduction of the laws, women earned a lot from public performances and many other occasions that required entertainment."The general atmosphere of insecurity and extremists taking over the entire region has crippled us. No one will invite you to a wedding or any other celebration to perform," said Fatma. "People fear to be branded sympathizers. We also lost our equipments worth thousands of dollars."Fatma, who has now picked up the shreds, talks of other women who saw their children drop out of school, as they could not keep in track paying their school fees as well as earning daily breads.The dislocations of music bands lead to disintegration and disarrays.