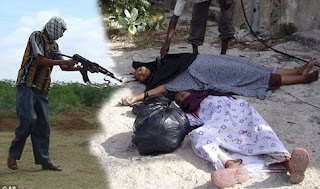 The teens were blindfolded with their hands behind their backs against a tree, and shot, according to a local journalist.
Belet-weyne, Somalia (AHN) - Somalia’s al Qaeda-inspired militant group, al Shabaab, has executed two Somali women in Belet-weyne. The two women were accused of spying for the Somali government. Al Shabaab regional governor Sheikh Yusuf Ali Ugaas told onlookers that the women were apprehended during one of the group's operations conducted in the village.“They look like beggars according to their haggard face, but they had been passing on the secrets of the Mujaheden in Hiran region for Christian Ethiopians and their apostate government,” Ugas said.He added the group’s jails are filled with people linked to espionage charges, whom, said they will undergone Shraia law.It is not the first time al Shabaab has carried out such sentences. In mid October, the group executed two people in a village outside of Mogadishu, accusing the pair of spying for the Ethiopian government.
Hundreds of locals, mostly displaced people, were invited to view the execution, which took place in the village square. People in the village were astonished by the hasty judgment, and expressed concern, a resident said.Also, On July 25, 2009, al Shabaab, which intends to impose a strict version of Sharia Islamic law throughout war-devastated Somalia, severed the right hands and left feet of four teenagers accused of robbery in Mogadishu.

Jowhar, Somalia (AHN) - Islamic militants in the town of Jowhar in southern Somalia on Wednesday took more than 20 men into custody, accusing them of shaving their beards, residents said.Hundreds of fighters from the insurgent group Al Shabaab were seen patrolling in the neighborhoods of the town looking for what they called violators of Islam. Locals told the media that the militants had been beating men who had shaved their beards.People in Jowhar voiced a deep anxiety about Al Shabaab operations, calling on officials of the group to stop using soldiers to harass civilians.Al Shabaab militants in the Hiran, Lower Jubba and Gedo regions had ordered men to shorten the length of their pants as well as cut their hair. One of the young people in the town of Belet-weyne told local radio station Shabelle, on condition of anonymity for security reasons, that Al Shabaab fighters started search operations in the neighborhoods of the town and detained 17 youths.Al Shabaab, which controls large swaths of territory in southern and central Somalia including many parts of the capital city Mogadishu, has imposed tight restrictions on women. They have been ordered to veil their faces and have banned women and men from sitting together on buses.Al Qaeda’s affiliate in the Horn of Africa nation is intent on imposing a harsh version of Sharia Islamic law throughout war-devastated Somalia.
More Crimes Against Humanity
Al-Qaeda's proxy in Africa Al-shabab cut of the tongue of a young man


Inside Al Shabab: How the Somalia militant group rules through fear