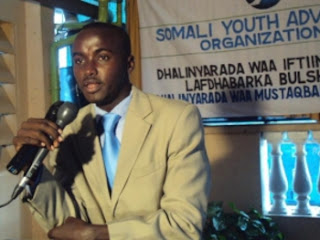 (TF.SF )Nairobi, Kenya
Somali youths in Nairobi, Kenya have been warned not to join the Islamist hard line group Al-shabaab and that of Al Hisbul Islam.
“We want parents to prevent their kids from joining Al-shabaab and the other militia groups in Somalia. We have to admit the seriousness of that situation; we have seen Al-shabaab insurgents are recruiting children to take gun rather than pen, so we are unwilling to let Al-Shabaab to continue such bad deeds against our young generation,” said Mohamed Ibrahim Ajib, the chairman person of the newly established Somali Youth Advocacy Organization (SYAO).“When parents send their children especially sons to Islamic schools like Quranic School, what happen after that? Al-shabaab go to Quranic School to persuade the children to be trained as military persons. They gave money to kids and some Al-shabaab officials are given to children for military training and that is against our Islamic religion,” said the Quran teacher Sheikh Omar Mohamed Farah. Attending the workshop were members of the Somali community in the capital Nairobi including politicians, parents, clerics and youths.
Posted by Siad barre at 4:16 PM