UN to Return to Somalia in Attempt to Stop Terrorist Takeover

Oct. 19 (Bloomberg) -- The United Nations is set to establish a political presence in Somalia for the first time in 17 years, aimed at creating a new constitution and government, the world body’s top envoy to the war-torn African nation said. 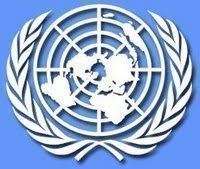 Final preparations are being made to base four workers in the capital Mogadishu and five each in the semi-autonomous provinces of Puntland and Somaliland, Augustine Mahiga said in an interview. The political operatives will shift operations late this month from Nairobi, Kenya, where the conflict in Somalia has confined UN political offices until now.
“The political office has been conspicuously absent from Somalia,” Mahiga, a former UN ambassador from Tanzania, said in an interview in New York. “It is important to have international staff in there to interact with the Transitional Federal Government and with local elders and religious leaders.”
Mahiga said the UN will focus on securing agreement on a constitution and arrangements to form a government to succeed the transitional government, whose mandate is due to expire in August 2011. The UN needs to build ministries in areas of defense, treasury, health, education and information, he said.
“There are 39 ministers, but they are ministers in name only,” Mahiga said. “There are no ministries.”
Somalia hasn’t had a functioning central administration since the ousting of former dictator Mohamed Siad Barre in 1991. Most of southern and central Somalia is under the control of insurgents led by the Islamic terrorist group al-Shabaab, which has pledged loyalty to al-Qaeda.
Security Council
Mahiga is in New York for an Oct. 21 meeting of the UN Security Council, where he said the African Union will seek backing to deploy additional troops in Somalia. The AU, which has 8,000 there now, wants to send 4,000 more this year and another 8,000 in 2011, Mahiga said.
Uganda has promised to provide all of the reinforcements, which will be sent mainly to the central and southern areas.
“This was always the plan,” Elmi Duale, Somalia’s ambassador to the UN, said in an interview, referring to the UN move into his nation. “The major issue was security. They said they cannot go there. Now this will be overcome.”
The reinforcements should enable the UN to eventually send in most of the 50 international workers now based in Nairobi, Mahiga said. UN agencies including the World Food Program and UN Children’s Fund have been working in Somalia, though confined to peaceful areas and with national staff.
Local Outreach
“Wherever there is going to be reasonable security, we want our people there, working with local leaders on the draft constitution,” Mahiga said. “We want to reach out to as many people beyond Mogadishu as we can. Our main target will be the central and southern area.”
The transitional government, which controls only portions of Mogadishu, is just emerging from a political crisis following the resignation of Prime Minister Omar Abdirashid Ali Sharmarke. Mahiga said it may take a month for Mohamed Abdullahi, appointed prime minister last week by President Sheikh Sharif Sheik Ahmed, to form a new government.
“We cannot afford another crisis,” he said. “All of the tasks we have before us are more or less in limbo, waiting for another government to be in place. The last thing we want is continuation of the status quo.”
--Editors: Edward DeMarco, Brigitte Greenberg.
To contact the reporter on this story: Bill Varner at the United Nations at wvarner@bloomberg.net
To contact the editor responsible for this story: Mark Silva in Washington at msilva34@bloomberg.net

send your comments to terrorfreesomalia@gmail.com
Posted by Siad barre at 11:14 AM